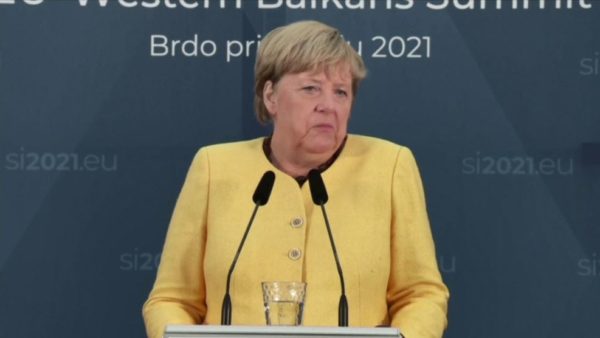 The President of Albania, Ilir Meta, considered the messages given today in the Brdo Summit between the EU and the Western Balkans as very encouraging, despite the declaration of the German Chancellor, Angela Merkel, who said that none of the countries have fulfilled the conditions.

Meta underlined that the Economic Plan of Investments and the New Agenda for Innovation should be exploited maximally to allow economic recovery and stop further depopulation of the country.

Meta emphasized that the opening of the accession negotiations with Albania and North Macedonia, and the visa liberalization for Kosovo, are very important for the entire region. According to the President, regional cooperation should focus on implementing the promises that are given.

The German Chancellor, Angela Merkel, attended the Brdo Summit, in Slovenia, held between the EU and the Western Balkan countries. Merkel rebuked voices that in this summit there could be a possible date for accepting the Western Balkans as part of the EU.

“I don’t believe in setting dates. I believe in fulfilling our promises. The accession can be done after the conditions are met”, Merkel told journalists before the EU summit.

According to Merkel, the EU would be pressured to set a date, regardless of the Western Balkans would fulfill the conditions set by the Block. The German Chancellor underlined that no accession can be done right now as none of the countries have fulfilled the conditions.

The Prime Minister of Kosovo, Albin Kurti, declared at the Brdo Summit in Slovenia that the EU has done a great injustice by not keeping the promise to lift the visa-free travel regime for the citizens of Kosovo. However, he added that he remains hopeful that the Block will keep its word.

As regards the five EU countries that don’t recognize Kosovo yet, Kurti appealed to them to join the others and recognize their independence. Spanish media wrote that their Prime Minister, Pedro Sanchez, had made sure that the summit in Slovenia would not have state symbols, as Spain doesn’t recognize Kosovo.

Together with Spain, the other countries that don’t recognize the independence of Kosovo are Greece, Romania, Cyprus, and Slovakia.

The EU Ambassador to Tirana, Luigi Soreca, reacted regarding the summit that is being held in Brdo, Slovenia.

According to Soreca, Brdo gave a clear message that the place of the Western Balkans is in the EU, as they share the same values and history.

The President of the European Commission, Ursula von der Leyen, declared that the EU benefits from the enlargement process, and this is the most important part.

“We want to give a clear message. The Western Balkans belong to the EU. We want them in the EU. We are a European family. We share the same story, same values, and I am convinced that we also share the same fate”.

The President of the European Council, Charles Michel, declared before the Brdo Summit in Slovenia that this is a new chance to confirm the European perspective with the Western Balkan countries.

“We will also have the possibility to make it clear that we are ready to mobilize more money and invest in these countries, and also to support the economic reforms, the fight against corruption, and the reforms to improve the governing process. We want closer ties to the region”, Michel declared.

The European Commissioner for Enlargement and Neighborhood, Oliver Varhelyi, declared that it is now time for the European Union to keep the promises made to the Western Balkan countries.

This is why we need to take our responsibilities and the right decisions that lead to this direction. We need to hold the first Intergovernmental Conference with North Macedonia and Albania, we must open the Chapters with Serbia, accelerate the process for declaring Bosnia-Herzegovina a candidate country and approve the visa liberalization for Kosovo”, Varhelyi declared.