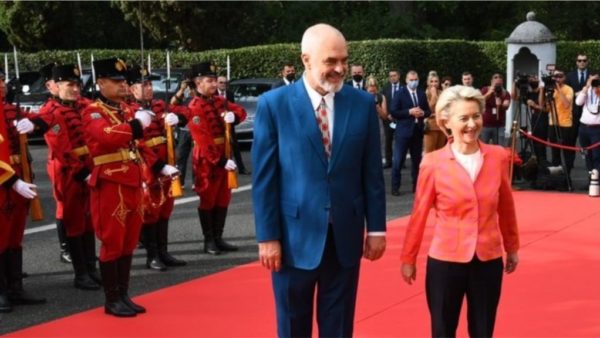 The future of Albania is in the EU. This is the clear message of the EC President, Ursula Von der Leyen, during her visit to Tirana.

In a Twitter post followed by a picture with the Albanian Prime Minister, Von der Leyen declared that the EC strongly supports this commitment while it values the judiciary reform in Albania. The EC President reiterates that the EU must respect this commitment.

“We are working closely to make sure we have a long-lasting cure for the pandemic. Europe is on your side, with 430,000 doses of vaccines donated to Albania. Our common priorities remain speeding up the vaccination process, creating jobs and the economic growth through the Economic and Investment Plan for the Western Balkans”, Von der Leyen declared.

The Albanian President expressed his confidence in the EU and underlined that the intensification of bilateral efforts against internal and external challenges is the key to success.

Rama: EU is exhausting regarding integration, but let’s not lose our patience

From Fushe Kruja, while inaugurating the “Korb Muca” and “Europa” schools, funded by the EC, the Albanian Prime Minister appealed to not lose patience with the EU as regards the integration process, adding that the assistance with the schools is the living proof of the solidarity and cooperation with the EU.

“We are in a place that is living proof of the solidarity and cooperation spirit, and the true relationship with the EU. This is an obvious, tangible, concrete reason to not lose patience with the European Union, which is exhausting in an aspect, and we know it very well. But it is a great and positive force that helps people and societies that are part of this continent”, Rama declared.

He added that Albania’s situation is absurd, after being blocked for the EU accession process by Bulgaria and North Macedonia. He thanked the European Commission for its support in the process.