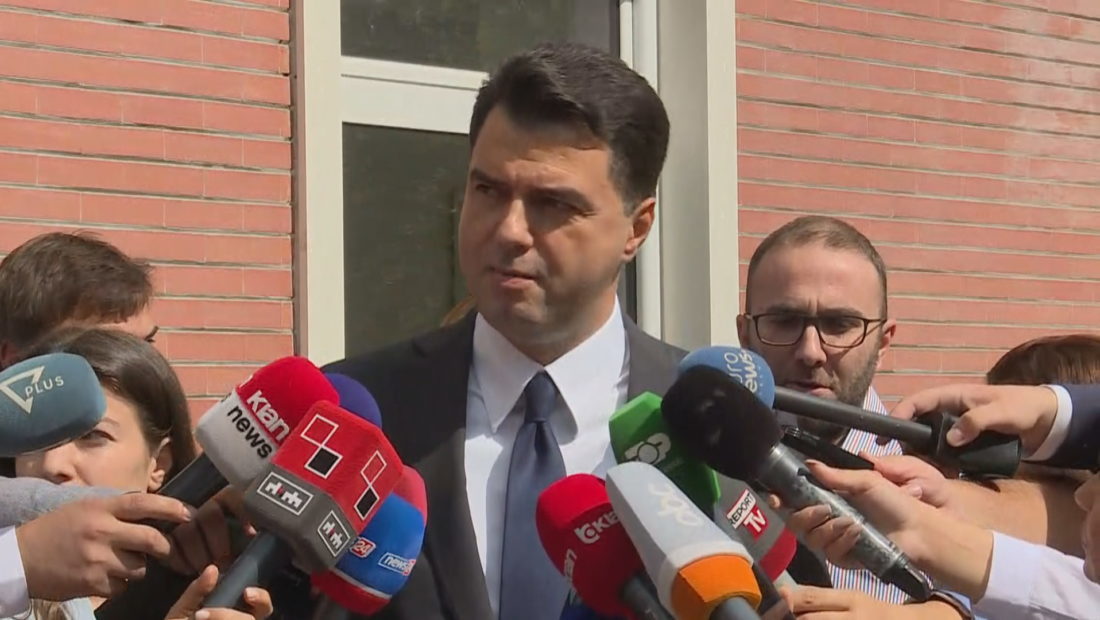 “Those who have refused the forums have ended badly. Be a man”, Berisha declared.

Berisha apologized for blessing Basha’s leadership in the party and underlined that he should resign and go where he came from. He also challenged Basha to confront the DP supporters and members on terrain.

“Why isn’t he coming to you, but he calls the DP leadership for meetings”, Berisha declared, asking the supporters to think about the party’s future.

Basha responds to Berisha: No meetings to discuss the decisions of the US government

The Democratic Party leader, Lulzim Basha, reacted to the accusations launched by the former PM, Sali Berisha, who said that Basha is Rama’s hostage.

Basha declared that there will be no meeting of the party leadership to discuss the decisions of the US government.

“For the past eight years, Rama accused me of being Berisha’s puppet. Berisha accused me yesterday of Being Rama’s hostage. The first one is a lie, the second one will never happen. The DP is progressing and will lead the battle for change that will come after removing this regime and bringing the country back to the path of democracy. This is the mission of the DP, and the mission of every Democratic Party member. I will stand it to the end. Party meetings to discuss the decisions of the SU government will never be allowed”, Basha declared.

Berisha responds to Basha: The Parliament is gathering to discuss the decisions of Rama’s hostage

“Rama is staying in power for more than eight years because he has made bargains with someone who is happy to stay in opposition for another 80 years. The DP assembly will meet, as its statute dictate. Those who are afraid of it cannot stop it. It will not gather to discuss the decisions of any government, but only the decisions of Rama’s hostage. The Assembly will also meet to save the DP from the bargains that are being made by Basha and Edi Rama so that we can bring back dignity and hope to the DP after four consequent losses against the most corrupted regime in Europe”, Berisha declared.

Noka: Basha backstabbed the DP, he’s afraid and is blackmailing the local leaders

Today’s guest on the A2 “Ditari”, Flamur Noka, former Interior Minister, spoke about the decision of Lulzim Basha to leave Sali Berisha outside the DP Parliamentary Group.

Noka declared that Basha should resign from the party leadership as he no longer has the support of the members, after backstabbing the DP.

“I had never imagined that the DP would come to this point, brought by its own party leader. It was unimaginable that he would backstab the DP. Why did he do it? Because he can be blackmailed, he cannot face pressure. But the duty of the party leader is to clarify it. No one approved that occult decision. No one imagined that it could happen”, Noka declared.

For Noka, Basha must make transparency and show why did he take that decision.

“Did he do it because he felt threatened for a visa that he couldn’t have for the past five years? Did he make this concession at the expense of the Democratic Party supporters? Is he a person who can be blackmailed? No one in Albania believes that Berisha is corrupted. I have been his collaborator and I know very well that no one dared talk about corruption affairs to Berisha. There has never been any concrete accusation about Berisha’s involvement in corruption”, Noka declared.

Noka added that Basha is feeling afraid for his post in the DP and is thtreatening the DP local leaders.