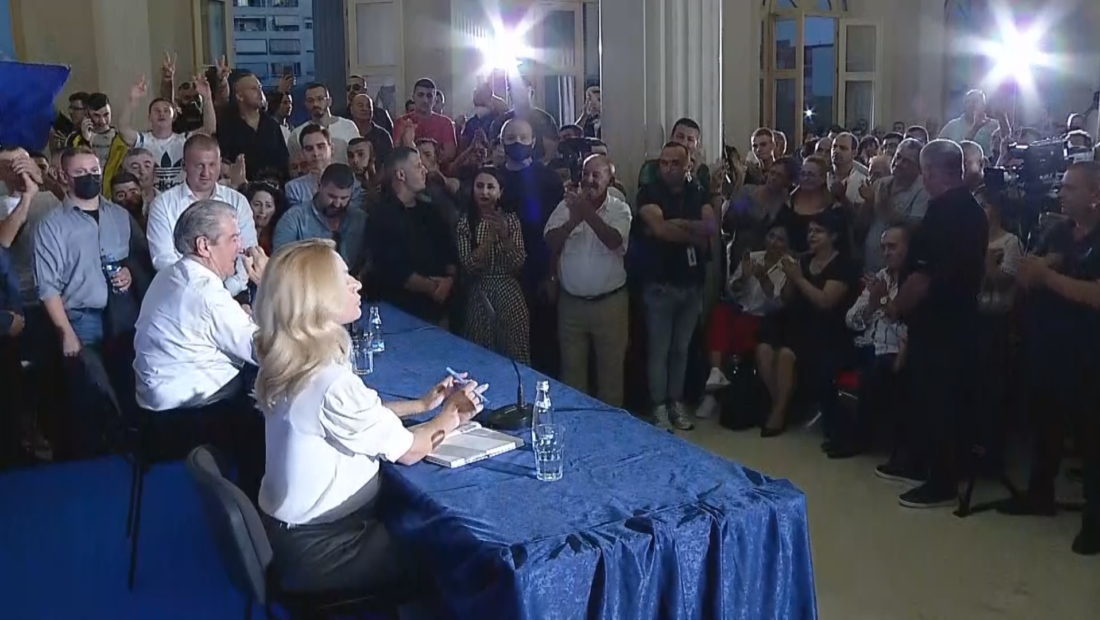 The former Albanian Prime Minister, Sali Berisha, continued his tour “for the reviving of the Democratic party” in Fier, after he was suspended from the DP Parliamentary Group. He was received by the local leader of the DP in Fier, Luan Baci, and hundreds of citizens.

The historic leader of the DP, who was banned from entering the USA by the State Secretary, which led to his suspension, accused the incumbent leader of being held hostage by Rama and of backstabbing the Democratic Party.

“By taking hostage the opposition leader, Edi Rama backstabbed the DP with the hand of Lulzim Basha. This debate should be done within people who trust the values and feel the responsibility to bring back hope and walk safely towards victory.

Berisha declared that however, the decision taken by the DP leader against the former PM should not divide the democrats. He invited them to refuse the division and that he himself remains the main supporter of Basha.

Berisha added that this initiative is done by him for the sake of the DP, not for himself. As for the decision of the USA to declare him non-grata, Berisha declared that the decision is based on slander and that he would sue the US State Department. He reiterated once again that this is done by Soros, who, according to Berisha, is planning with Belgrade the project for changing the borders of Kosovo and dismantle the country.

During his speech in Fier, Berisha declared that these are the hardest days for the Albanian people in the past 30 years, as Rama’s regime has impoverished the country, has pushed young people to leave abroad and has trusted the national interest to Vucic.

“The oil price is the highest in the world today, with Albania having the lowest salaries in the world. The Albanian people are abandoning their country as no other place that lives in peace. Rama is killing the future of Albanians every day. No nation can prosper if they don’t take care of the national interest. The national interest is what can be converted into what’s best for the people. Today this interest was trusted to Belgrade and to the biggest war criminal in Europe, Vucic”.

Berisha responds to the US Ambassador, Yuri Kim

The former DP leader also responded to the US Ambassador to Tirana, Yuri Kim, after her declaration for the “Voice of America” that when someone is declared non-grata by the US State Secretary for significant corruption, those who are surprised by it are not being very sincere.

“The Ambassador told Lulzim Basha that Berisha knows about the files regarding accusations of the USA, and that I don’t trust those files. The US State Department declared that their decisions were taken based on the reports compiled by the government of Edi Rama. For two consequent years, Rama years, Rama has sent dozens of decisions that the US government has rejected as unfounded. I am not saying that the files don’t exist, but they are based on slander. I will go back to the Parliament, that’s out of the question”, Berisha declared.

As regards the Mini-Schengen, the former Albanian PM reiterated that it is the reestablishing of the Serbian hegemony in the region. But this time it won’t be with the Croatians and Serbians, but with Albanians. Farmers in all of Albania will be forced to work for the farms of Serbia. “We will never accept this. Hence, we opposed it. Soros so that he has an unbreakable opponent on this matter”, Berisha declared.

The DP leader, Lulzim Basha, met with the party leaders and MPs in different districts. The Party leaders of Fier were the only ones who went for a second time to Basha’s office, but they deny that this is related to the meeting that Berisha is holding in parallel.

Although they say that these meetings are just routine, the main message given by Lulzim Basha was to inform the DP base that the decision towards Berisha is on the best interest of the DP itself.

BAsha also met with MPs from Kukes and Dibra.