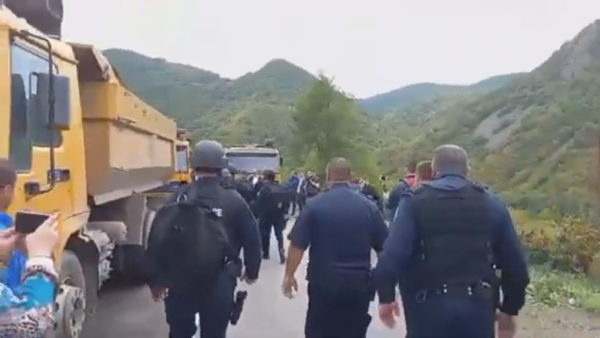 The government of Prishtina has implemented another measure of full reciprocity with Belgrade by replacing the Serbian car plates with the provisory ones of Kosovo. As of today, vehicles with Serbian plates will not be allowed in Kosovo.

But this decision has caused discontent among Kosovo Serbs, who organized a protest by blocking a road near the Jarinja and Bernjak border checkpoint. The Kosovo police forced intervened with tear gas to free the road.

Kurti: The measure is not against Serbs, it was imposed by Serbia

The Prime Minister of Kosovo, Albin Kurti, clarified that the decision is not against the Serbs and it has no intention to cause destabilization.

“The temporary car plates are not because we want so. It has been imposed by the other side”, Kurti declared.

The Kosovo Albanians support the decisions, while Serbs demand Prishtina and Belgrade to stop such measures.

Danilo Ilic, a Serbian citizen in Kosovo, considers this another crazy action between the Kosovo and Serbian authorities which affects only innocent citizens rather than anyone in the governments of both countries.

The KFOR mission is monitoring the border checkpoints between Kosovo and Serbia. The situation remains stable. Kosovo had warned of such a move in the recent dialogue with Serbia, intermediated by the EU. Deputy PM Besnik Bislimi declared that the agreement of 2016 expires on September 15th and that Kosovo will not respect it unilaterally.

Vucic to discuss the matter with Ljacak

The Serbian government has responded with harsh reactions. President Vucic will discuss with the EU representative for the dialogue with Kosovo, Miroslav Lajcak, who is visiting Belgrade after leaving Prishtina.

The Chairman of the Committee for Kosovo at the Serbian Parliament, Milovan Drecun, declared that the action of the Kosovo Special Forces was expected in the north. He appealed to KFOR to guarantee freedom of movement.

EU Reaction, Stano: Dialogue should be used to resolve such issues

The EU Spokesperson for Foreign Policy and Security, Peter Stano, declared in a press release that both sides should restrain from tension and that the dialogue should be used to resolve such disagreements.

“We have followed the situation closely and I want to underline that the freedom of movement is a basic condition of the EU. We expect Kosovo and Serbia to promote it. We appeal to both parties to reduce tensions immediately and without any delay”, Stano declared.