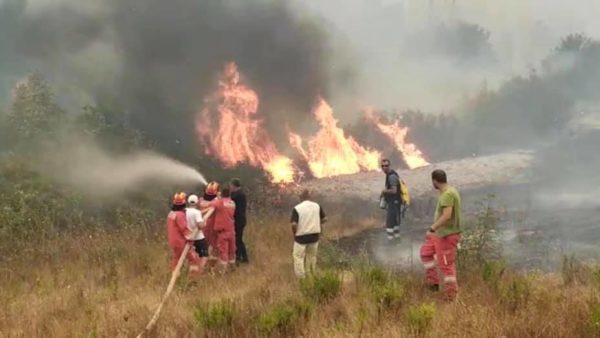 As wildfires continue throughout Albania, Defense Minister Niko Peleshi announced that the authorities have prevented a catastrophe at the Vlora River with interventions from air and land, neutralizing the danger to the residential homes in the area.

“With support from the land and the air, we have intervened in Karaburun, despite the difficult climatic conditions”, Peleshi declared.

The Albanian Prime Minister, Edi Rama, declared that they are evacuating citizens in the endangered areas with the help of the Armed Forces.

According to Rama, the helicopters in Gumenica have been able to put out the fires that were about to burn several civilian residences.

“Our main priority remains the evacuation of the citizens, who must implement the orders of the Civilian Defense Structures for evacuation”, Rama declared.

In Korca, a 300-year-old church was at danger due to the fires. The residents and the firefighters have tried to control the flames. Authorities suspect that the fire was intentional, while three hectares of forest have already been burned.

Another fire appeared this Thursday in Narta, Vlora, which endangered even the fuel deposits in the area. The Mayor of Vlora, Dritan Lela, declared that the fires were put under control. He appealed citizens to be careful and stop causing such damage.

Another fire was seen today in Tepe, Shkdoer. Several houses were put in danger. The intervention was quick inititally from the residents and later form the firefighters. Fortunately, it was put out very quickly.