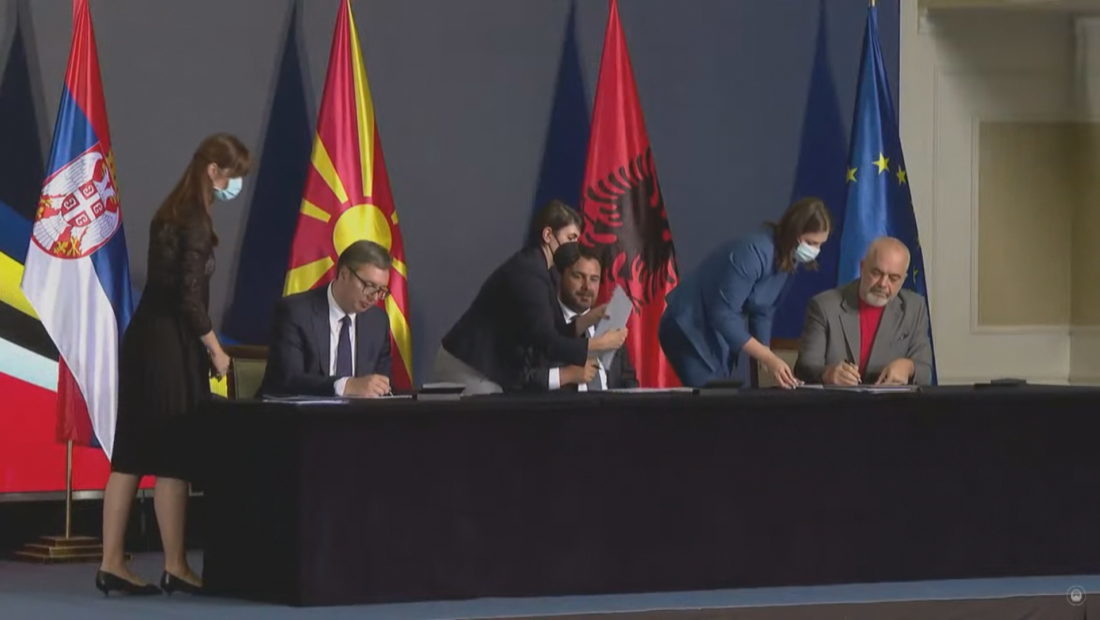 Rama in Skopje: Who doesn’t understand how small we are when divided, is condemned to live in the past

The Albanian Prime Minister, Edi Rama, declared from the Economic Forum for Regional Cooperation, which is being held in Skopje, that who doesn’t understand that we are smaller when divided, is condemned to live in the past.

“I hope that this will be a good day not only for those who arrived from Albania and Serbia, but also from Montenegro, Kosovo and other countries. The mosaic of today’s attendance goes beyond our three countries today. I believe that this mosaic is enough to understand the significance of this initiative. This is the right thing and different from what some people preach, it is coming too late.

“If we enable free movement, the GDP of our countries would increase by 6.7%. Why should we deprive ourselves of this extraordinary possibility by staying everyone within their small space?

“We need to do everything possible to gain on the time that we have lost, which is huge. We don’t have to wait for the region’s integration to implement the four freedoms of Europe. We don’t have to be in the EU. We can do it now”, Rama declared.

Zaev on Balkan’s Mini-Schengen initiative: We cannot wait for the EU to resolve its internal problems

The Prime Minister of North Macedonia, Zoran Zaev, declared that the Balkan Minischengen Project, which aims to unite the Western Balkan countries into one single market, provides exactly the 4 fundamental freedoms of the Union.

“This is about freedom of movement for people, goods, capital and services. The purpose is to have no border stops between Serbia, North Macedonia and Albania. In the future we hope it will get even wider”, Zaev said in a press release before the meeting with PM Rama and Serbian President, Vucic, at the Skopje Economic Forum.

Zaev said that the Western Balkan countries cannot wait until the internal conditions of the European Union are ready to accept them in the EU.

“We heard the appeals of businesses in the region and took steps to eliminate the administrative procedures. This will make the Balkans a more attractive market. Not lifting the visa regime for Kosovo goes against the principles of the EU itself. We cannot wait for the EU to resolve its internal problems. We will wait, but by continuing with our joint economic initiatives”, Zaev said.

Vucic on Mini-Schengen: Let’s see towards the future and leave something to our children

The Serbian President, Alexandar Vucic, reiterated once again from the Skopje Forum why the Mini-Schengen will bring good opportunities to the countries that will join it.

Vucic praised the talks with the other regional leaders and underlined the need to see towards the future and leave something better to the next generations.

“When we started this initiative everything seemed better for the future and that will change things in the Balkans. We all had problems. However, we decided to look at the future and leave something to our children. We built a sincere trust between each other. The eyes of all of us are towards the future, but we are not naïve to believe that someone else will work hard about it, if we don’t work on our own.

“We must show our citizens in North Macedonia, Serbia and Albania that we are capable and we can decide on our own, we can improve their lives and not wait for someone to take our fate in their hands. We reached an agreement yesterday very easily. We accepted everything that was proposed by Mr. Rama and Mr. Zaev. These propositions are in our interest. Someone says that Serbia is benefiting most, but that’s not true. The free movement reduces costs because there are no stops in the borders”, Vucic declared.

As the leaders of Albania, North Macedonia and Serbia met in Skopje to discuss the Balkan Mini-Schengen Initiative, Kosovo remains firm in its position against it. PM Albin Kurti considered it an initiative without vision that doesn’t have the support of Kosovo.

Kurti did not attend the Skopje Forum, while he declared through an article on Radio Free Europe that the Novi Sad initiative doesn’t have the support of Kosovo.

“The so-called mini-Schengen is an initiative without any vision for the region. We have propose to advance with the regional cooperation from CEFTA to SEFTA, based on the EFTA-EEA model from which would benefit all Western Balkan countries”, Kurti declared.

The mini-Schengen idea was introduced in Novi Sad, Serbia, on October 10th 2019, by the leaders of Serbia, North Macedonia and Albania. The North Macedonian PM, Zoran Zaev, who organized the meeting, appealed the Western Balkan countries to join the initiative which would create the vision for real development in the region.

The Prime Minister of Kosovo has opposed the mini-Schengen initiative by reiterating that the Balkans should go back to the EU integration agenda, rather than focusing on projects that will hurt Albanians.