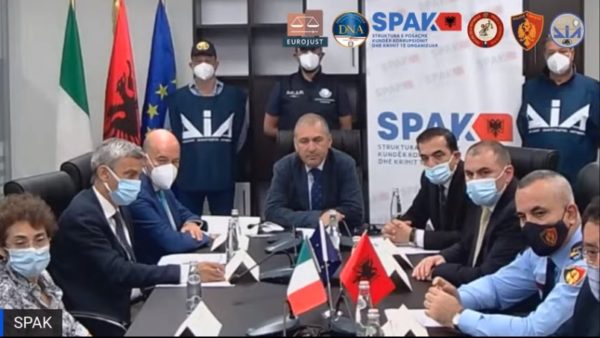 A large operation conducted by the Albanian Special Prosecution Against Corruption in cooperation with the Italian authorities, led to the arresting of 38 people in Albania, including one Prosecutor and several officials. The organized crime had created a drug traffic system, from the production to the distribution of illegal substances.

Among the people who were arrested was also the Vlora Prosecutor, Maksim Sota, for power abuse; the former Vlora Police Chief, Festim Lelaj, and the Chief of the Traffic Sector at the General Police Directory, Ilir Balla. Another arrested official was Saimir Kurti, director of the Employment Agency in Kavaja.

The National Prosecutor of the Italian Antimafia, Cafiero de Raho, praised the work done by the Special Anticorruption Prosecution after the successful operation. De Raho said that the Bari Prosecution and the Albanian SPAK have worked like a single team in this operation.

“The cooperation with Albania allows to strengthen the structures that fight the organized crime. This is essential for people to trust such structures. This gives us more trust for the future. Criminal organizations in Albania and Italy will find an impassable wall that will prevent them from carrying out their activity”, he added.

The President of the Albanian Special Anticorruption Prosecution (SPAK), Arben Kraja, was present in the joint conference held with the Italian authorities.

After thanking the Italian Prosecution for the close cooperation that led to a successful operation, Kraja announced that they have issued arrest measures for 28 persons, including high-level officials of the police and the Prosecution.

Kraja also said that after administering the evidence, they were able to hit a very important criminal organization and seized real estate properties with a value of millions of Europes. Kraja said that four persons involved in the traffic cooperated with the police in order to reach such a result, which includes even charges for money laundering.

Prosecutor Vladimir Mara declared that the police has been able to seize 6 tons of narcotics in Albania and Italy. The illegal substances are mainly cannabis, but also cocaine, heroin and others.

“We have issued arrest orders for 80 persons, 28 arrested today in Albania, Italy, Montenegro and Spain”, Mara said. He also added that the Albanian Police seized 11 properties, mainly in Vlora, Kavaja and Tirana, such as hotels, supermarkets and restaurants. They have also seized four companies and their assets, mounting up to 3 million EUR.