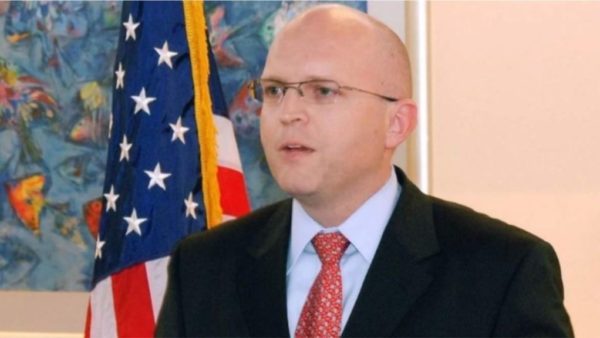 The US Embassy issued a declaration on the visit of the US Deputy Assistant Secretary of State, Philip Reeker, in Tirana.

On his arrival, Reeker met with the Albanian Prime Minister, Edi Rama; the Democratic Party leader, Lulzim Basha, and some fully vettit members of the judicial system in Albania.

Acting Assistant Secretary of State for European and Eurasian Affairs Ambassador Philip T. Reeker visited Tirana today. During the visit he met with Prime Minister Rama, Democratic Party Chair Lulzim Basha, several fully-vetted members of Albania’s justice system, and other leaders. In all meetings, Acting Assistant Secretary Reeker emphasized the importance of U.S.-Albanian relations over the past 30 years since Albania rejected communist dictatorship in favor of democracy. He underlined President Biden and Secretary of State Blinken’s determination that the fight against corruption, including through designations under 7031(c) of the Department of State, Foreign Operations, and Related Programs Appropriations Act, 2021, is a core national security interest for the United States. He congratulated Albania’s leaders on their success in hosting Exercise Defender Europe 21, which highlighted Albania’s strategic role in the region. He welcomed Albania’s role in the region and on the global stage as Albania takes a seat on the UN Security Council. The Acting Assistant Secretary reiterated the United States’ strong support for reforms within the justice system and in fighting organized crime, highlighting how progress on these issues will promote democracy, defense, and business in Albania and continue Albania’s path towards EU accession.