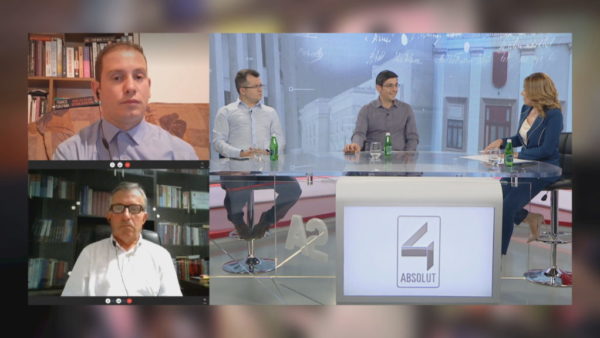 Scholar Enver Bytyçi commented on “Absolut 5” the virtual meeting of Rama, Vucic and Zaev. According to him, the Balkan Minischengen is not an initiative from the EU, but from Rama and Vucic, who want to see Serbia expand in the south while the process isolates Kosovo.

Bytyci stated that he has information that various Serbian coampnies are registering businesses in Albania and are trying to become partners in the Albanian ports.

According to him, Rama is working to serve the interests of Serbia, and that is why Kurti has been declared against the Balkan Mini-Schengen.

“Would Vucic allow citizens from Kosovo to enter Serbia with their Kosovo passport? A country that is an initiator of this initiative, but doesn’t accept the borders, would they accept borders? Serbia aims to isolate Kosovo. Hence, they need to discuss the resolve the political issues, then discuss the Mini-Schengen. The Albanian PM and Serbian President have agreed to cause problems in Kosovo. This is why Kurti is against the Balkan Mini-Schengen. When Kosovo did not attend the Skopje meeting, Rama publicly accused that Kosovo is isolating itself. Rama works with Vucic not for the interests of Serbia, not for the interests of Kosovo and Albania. Without recognizing Kosovo, there are zero chances to have Kosovo as an equal part of this process. Serbia doesn’t allow Kosovo to be equal to the other countries. For this reason, Kosovo refuses this initiative which serves to Serbia and not to Kosovo. Today’s meeting was against Albania, against Kosovo, but also against Europe. Rama is giving support to Vucic even with his attacks towards the EU, to impose an acceptable solution for Serbia in the dialogue for Kosovo”, Bytyci declared.

For Bytyci, the Mini-Schengen is a joint agreement between Rama and Vucic to pressure Prishtina so that it can accept a solution in favor of Serbia.

“ Mini-Schengen, a message to Brussels”, Kalemaj: Rama is getting in unprepared. Serbia has an economic advantage

“Albania has entered the Balkan Mini-Schengen project without preparation, without discussions, different from Serbia that has an economic advantage”, declared analyst Ilir Kalemaj on Absolut 4, commenting on the meeting of Rama, Vucic and Zaev for the “Balkan Mini-Schengen” project.

According to Kalemaj, the Mini-Schengen was produced in Belgrade as a project of former Yugoslavia.

“On one side we have the Berlin Process, the connectivity agenda, CEFTA and other regional mechanisms that mitigate many aspects in the region. What is the Mini-Schengen needed for? This is not serious”, Kalema declared.

“There have been promises for removing the ID for travel. They spoke on the 30 million hours that trucks spend in the border. They spoke about unifying the market and recnogize diplomas. We don’t have reciprocity with Serbia. Serbia has an economic advantage, production capacities and better infrastructure. We have entered without feasibility studies, without a group of experts, without consultations and with just the meetings of the Prime Minister, who tries to show the locals that he is trying to get inside the EU through the smaller door”, Kalemaj declared.

The analyst added that he project is being used for political effects and for giving a message to Brussels.

“Albania ahsn’t fulfilled the main integration criteria. It’s a mini-Schengen because there are only three countries who initiatied. It was rejected by Kosovo, Bosnia and Montenegro only attended the meeting with the Minister of Finances. This is being used for political effects and for giving a message to Brussels, rather than for a concrete reason”, Kalemaj added.

Mini-Schengen, Erlis Cela: When Tirana and Belgrade are on the same page and Kosovo is against it, there’s something wrong

Communication professor, Erlis Cela, sees the Mini-Schengen as a space for having Albania as a factor in the region. But he underlined that this comes more from the internal pressure and the lack of meetings in Europe. Cela said for Absolut 4 that the most comfortable one in this situation is the Serbian President, Aleksander Vucic.

“Serbia has started the EU negotiations. Vucic has more advantage in relation to Kosovo. He has received support and he is very comfortable in this meeting, for which Kosovo has left itself out, as Rama declares”, said Cela.

The Communication Professor admits that the principles of this initiative are not wrong, but the problem stands on the fact that two governments of Kosovo have rejected this project, while it has received support from Belgrade and Tirana.

“The stance of the new US administration on this topic remains to be seen. The principles on which the initiative stands on are not wrong. I see the situation from the point of view of Kosovo. Two governments have rejected this initiative. The Albanian government leaves the pressure on Kosovo, seeing it as an adversary in this process, when the government of Albania has an obligation towards Kosovo. We could have thought of such an initiative together. When Kosovo and Belgrade have a different stance, there’s something wrong. We have consensus from all political forces in Kosovo. Tirana and Belgrade are on the same mage”, Cela declared.

Mini-Schengen, Gurakuq Kuqi: There’s something being played behind closed doors that is damaging Kosovo

For political expert Gurakuq Kuqi, the meeting between Rama, Vucic and Zaev has something that has been discussed behind closed doors and not allowed to the public, because it would cause a political hit for Albania.

“Montenegro is refusing to attend these meetings”, Kuqi said. “It is strange why the Albanian government makes policies with Serbia. Serbia has been insisting to implement this initiative in the region. This policy is causing huge damage to Kosovo, pushing forward the Serbian policy that aims to not recognize Kosovo as a state. They want to divide it”, Kuqi said.

He added that today’s meeting was not portrayed widely among the Kosovo media, but he mentioned the latest declaration of Vucic  for the Serbian newspapers.

“Vucic didn’t mention the meeting with Rama and Zaev, but he said that they are in favor of having a compromise with Kosovo, but Kosovo should forget the seat in the UN”.