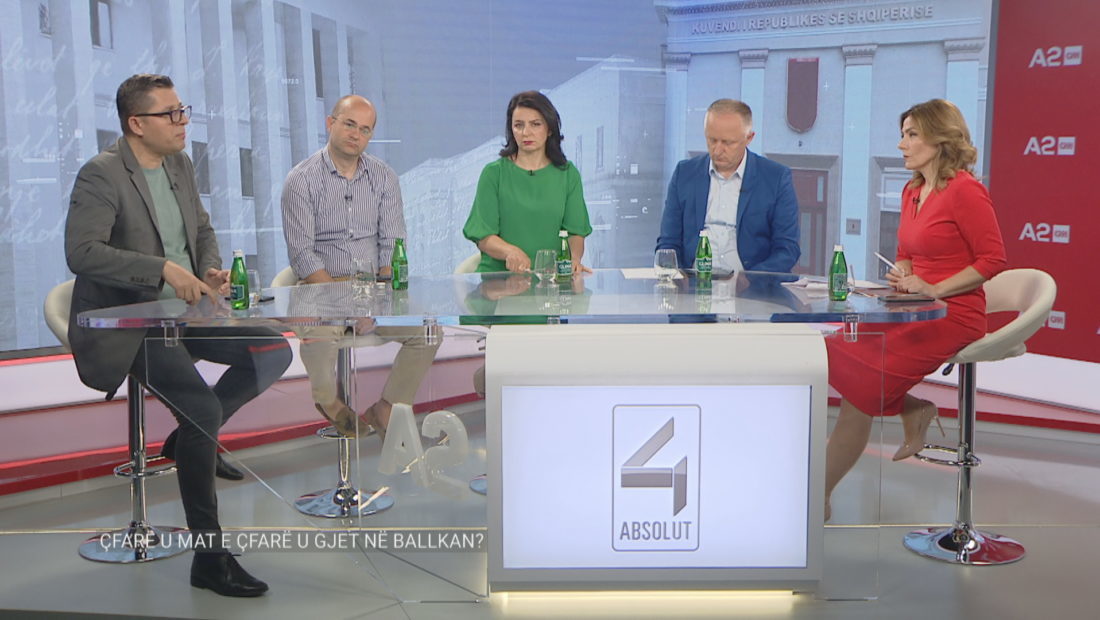 Today’s guest on “Absolut 4”, Edlira Gjoni, communication expert, discussed the results of the Balkan Barometer, published by the Council of Regional Cooperation. Gjoni declared that there is discontent that people are leaving, but there is also a reduced desire of people wanting to leave the Balkans, two elements that go against each other.

“Some findings make no sense. The biggest concern for the Balkans remains unemployment and the economic situation, but this has dropped by 15 points, compared to last year. The economy didn’t see any bright growth. This is the truth. Nothing has changed economically and these seem to be the main concern for the 18 million residents of the Balkans.

“I think there is an artificial growth of corruption. They must look at the source of how this barometer was done. The concern for employment has increased equally as much as the concern for corruption. We know corruption is a problem in Albania, but not to the point of not letting us sleep.

“As regards emigration, businesses and the government may be concerned for the citizens leaving the country. There is an increased discontent about this, but there is also a reduced desire for leaving the Balkans. These things go against each other. There are many discrepancies with the findings”, Gjoni declared.

Vurmo: The poll is not representative, with a 55% refusal level

Gjergji Vurmo, from the Institute for Democracy and Mediation, declared that the fact that 55% of the people refused to answer these questions, means that the Barometer is not very representative. He added that its findings have not changed a lot during the years, which means that there’s a problem with the way how the study is thone.

“I am not sure about the data, but there are many questions that you cannot explain. In a pandemic country, the pandemic has not been mentioned as the main concern. Other matters as well, such as crime. Nationalism is not an issue? I see the poll from the methodology it has used. In this case, it is similar to the others. When a poll says nothing new for several years, there’s a problem with the poll. The approach followed by RCC is interesting. It would be interesting to see what the public thinks, what businesses think. The company that conducted the study also writes that 55% of the people refused to be part of it.

“The interview is also very long. Getting inside the house of a person during a pandemic year must have been hard. I don’t know how they carried out this poll. If a poll takes 20 minutes, it becomes tedious. It seems like they have questioned 450-500 people in every country and this means it is not representing at all. It is unexplainable that in a pandemic year no one says that the pandemic is one of their biggest fears”, Vurmo declared.

“Albania, an EU member by 2025”, Dervishi: This was the strangest finding of the Balkan Barometer

Lutfi Dervishi declared on “Absolut 4” that the strangest finding of the Balkan Barometer was the fact that Albanians believe that by 2025 they will be part of the EU.

Dervishi added that the good news, which deserves to be discussed, is the initiative of the Regional Union Council, which will be finalized on July 1st and that will allow citizens of six Balkan countries to have free-roaming fees when traveling to each other.

“This is the seventh year that the Balkan Barometer measures the perception of the public and businesses. The problems remain the same, in seven years. Unemployment, people leaving, emigration, low trust in institutions, a slight increase of the idea of regional cooperation and integration, besides the excessive enthusiasm of Albanians who believe that they will be part of the Eu by 2025. This was the strangest. Optimism is not the right word to describe it”, Dervishi declared.

“The good thing about these polls is that they can be used by the decision-makers and media outlets to measure the public’s temperature. There’s nothing new, but there are differences from one country to another. The enthusiasm for the EU in Kosovo and Albania is around 90%, in Bosnia and Serbia, it’s under 50%.

“The most interesting thing is the mechanism that oversees this barometer. In political terms, they are not referred to as countries, due to the known disputes. The term they use is ‘economies’. The good news is the free-roaming between six countries. This is an initiative of the Regional Union Council and will be finalized by July 1st. This is a practical approach. We cannot resolve an issue such as the Belgrade-Prishtina dialogue, but we can start an approach with making people benefit more.

“These are six countries, six economies, 18 million people. We are very behind as regards infrastructure, even with the digital infrastructure, but also the cooperation between the economies of the region. Energy is a big issue. It is clear that the pandemic may have lowered the desire to leave the country, not the flourishing economy. However, the publication of this barometer is also done during the blocking of the EU accession negotiation”, Dervishi declared.

Shkodra: The pandemic brought out the hidden skeletons of the Albanian economy

Arben Shkodra, from the Association of Producers, tonight’s guest on Absolut 4, commented on the issues that the Albanian economy is facing.

According to Shkodra, the pandemic showed that the Albanian economy was very weak.

“The Barometer is more of a reinforcement of the discussions that were done during a pandemic year and a post-pandemic year. But the problems remain old. They are even aggravated due to the pandemic and the earthquake. It has been focused on Tirana, Durres, and Lezha, which is very important, but non-significant for businesses, industry, finances, etc. The pandemic showed that our economy was very fragile, with very specific problems. We have a systemic issue, not issues with a specific sector’, Shkodra declared.