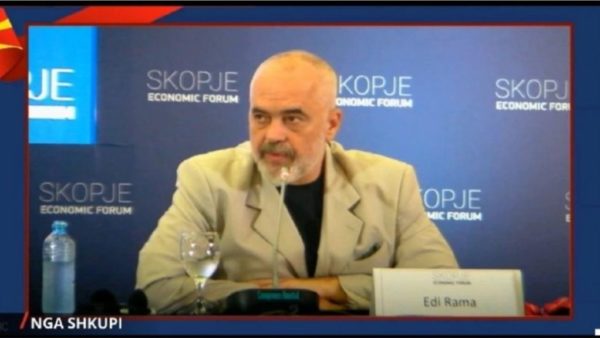 The Albanian Prime Minister, Edi Rama, attended the Economic Forum of North Macedonia in Skopje, one day after the EU failed to open the first Intergovernmental Meeting with Albania and North Macedonia, due to a veto imposed by Bulgaria.

Rama declared that this was a failure of the EU, not of Albania and North Macedonia.

“We are an important economic partner of North Macedonia. We didn’t fail. They failed. It’s their house. We want to be part of it, but it’s not us who decide. We are in Europe, we are surrounded by European borders. The only regret is that they should tell us that the admission rules are not ready yet, because there is a strange situation. Citizens in Albania believe the EU officials and think that the issue is from their internal policy”, Rama declared.

However, Rama says he is optimistic and that his main concern is seeing Albania progress.

“It is not the first time that they fail to give us the chance for starting the first Intergovernment Conference. It is just like a marriage. You prepare everything and in the end the bride doesn’t show up. We will keep progressing and do our work. We were ready even before. Just because some countries said that Albania wasn’t ready, doesn’t mean that Albania really wasn’t. But this is related to their internal matters. We were not ready because the Netherlands had its own elections. I am concerned about the progress that we’re making, not about this. Some statesmen in Brussels are telling us that we should progress. I am not pessimistic, although they may fail other times”, Rama declared.