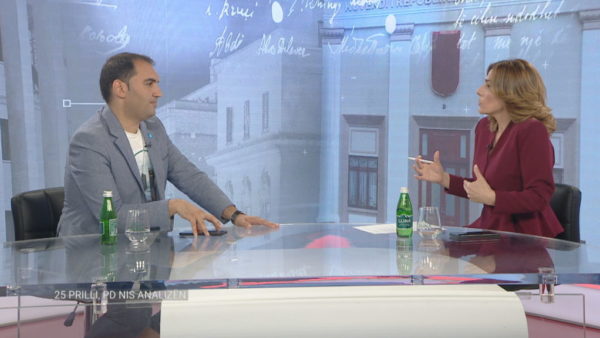 Belind Kellici, member of the Democratic Party leadership and elected MP from the April 25th elections, was tonight’s guest on A2-s “Absolut 4”. He commented the analysis that the DP expects in the upcoming days.

“We cannot say that we did everything perfectly in this campaign. I was not 100% perfect and we really need a reflection to learn from our mistakes and go to the National Assembly with a detailed report from all Democrats. Without forgetting the collection of evidence for the electoral massacre”, Kellici declared.

“It was a true electoral massacre. I have this information from people who were on terrain. It is now time to prove them. I have denounced the electoral massacre in the Durres District. I mentioned 72 names and filed reports at the Special Anticorruption Prosecution. We don’t have any information about the progress even after two months. Today, as we speak, I have been sued for slander. We have done our job, we referred the evidence to the law enforcing institutions. We will continue the legal battle to the end. The OSCE/ODIHR report will come out and after that we will decide about our further political action”, Kellici declared.

When asked about the role of Edith Harxhi, Bujar Nishani and Fatbardh Kadilli in the Democratic Party, leadership members who opposed Basha in the internal elections, Kellici declared that they all have their roles and their profile in the party.

“Mr.Kadilli has been part of the DP for the past 30 years. He has his political profile in the party. He said that the race was not equal, but he accepted the result and will keep staying in the party. For me it is the right decision, an asset that should not be lost. The same goes for Mrs.Harxhi and Mr.Shehaj. They are assets that complement each other and the Democratic Party group”, Kellici declared.