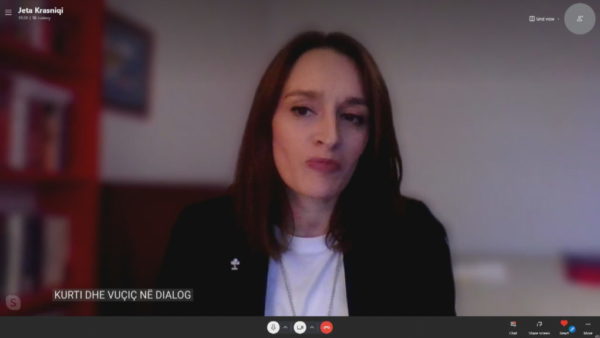 Jeta Krasniqi, from the Kosovo Institution for Democracy, declared on “Absolut 4” that Kurti unfolded his stances in today’s meeting with Vucic. She expects that Kurti shouldn’t lose time for the next meeting.

“It is hard to start everything from scratch. The EU was clear that Kurti would not continue the dialogue where Hoti left it, as regards the Association of the Serbian Communes, the financing, etc. No time should be lost in the next meeting, and there should be an increased presence from the EU and USA, in order to align the positions of the parties. There is no agreement in the agenda and there will be attempts to approximate the agenda if they do not align it”.

Responding to Nurellari declarations, Krasniqi said she doesn’t see Kurti as naïve or unprepared, as she recognizes the dialogue process. According to her, the legal status of the agreements reached before remains unknown, and Kurti is aiming for a new approach.