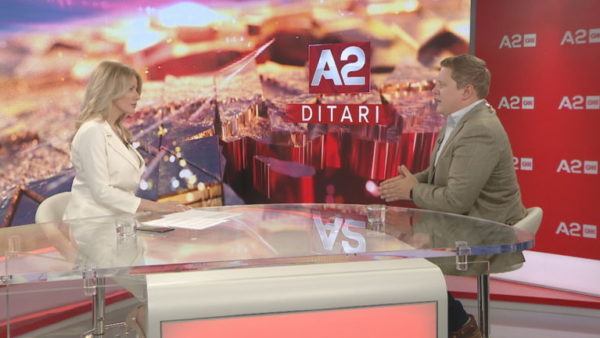 The German Foundation “Konrad Adenauer” has opened its offices in more than 120 countries worldwide. Their mission is to make an indepdenent contribution to the promotion of democracy, the rule of law and the social market economy, by supporting  support ongoing foreign and security policy dialogue and exchange between cultures and religions.

The executive of this foundation, Tobias Ruttershoff, was today’s guest on A2 “Ditari”, to explain the orientation of their influence in Albania, and their stance on the political developments regarding Albania’s EU aspirations.

As regards the April 25th elections, he Ruttershoff declared that first they must wait for the ODIHR report. He underlined that the DP should be a strong opposition in Parliament.

“We have watched the elections closely. We see some light, but also some shadows. The Electoral Day was calm.  What is not good are the reports of irregularities we have seen, such as vote buying, pressure and home legalizations. I encourage all political parties to make it possible for these people to respond in front of the justice. We must see the official report of ODIHR. We are also going to assess the accusations raised by the DP. We need to look at the whole picture of the elections. There should be criminal proceedings. The DP must be a strong opposition in Parliament. I have heard Basha say that he will not accept the elections, however, they will be part of the Parliament. I think that this is the right mentality”, Ruttershoff declared.

As regards the internal elections of the DP, which will be held on June to elect the party leader, Ruttershoff declared that he has had contacts with all the candidates in the past. “All of them have great experience. This is a good possibility for the party and now it is up to the base to vote. We must stay neutral. We have worked with the structure and we will keep working”.

Ruttershoff sees Berisha’s “non-grata” from the USA as a personal matter for the former PM.

“It is too early to comment on that. We need more time to get to know more facts. We won’t forget Berisha’s achievements in the past, such as having Albania join NATO and the progress with the integration reform. It’s a strong signal from the USA. We wills ee the consequences, but I don’t think that this is a matter of the DP. This is his private matter. The Prosecution has the right to look at the facts. The PM of Austria has also been accused. Until he has faced trial, he remains just a person who has been accused.

The Chairman of the Konrad Adenauer Foundation believes that Albania will be part of the EU one day, being surrounded by EU countries.

“There are reserves, if you see the current situation in Albania or even past experiences. The conditions set by the EU are very clear and have been accepted by both Albanian political sides. There are matters that need more answers, as regards the la,w the media and corruption. This is the reason why the laws are adapted, because these are the very same rules of the EU. We are looking at the further conditions as well. The process is very clear”, he declared.

Ruttershoff sees the second impeachment of President Meta as a bit politically motivated, since the Socialist Party could wait for the autumn to proceed with the impeachment. “However, it will be up to the Constitutional Court. It will be interesting to see how the new Court will adjudicate this case. We want a functional Constitutional Court”, said the Chairman of the Konrad Adenauer Foundation.