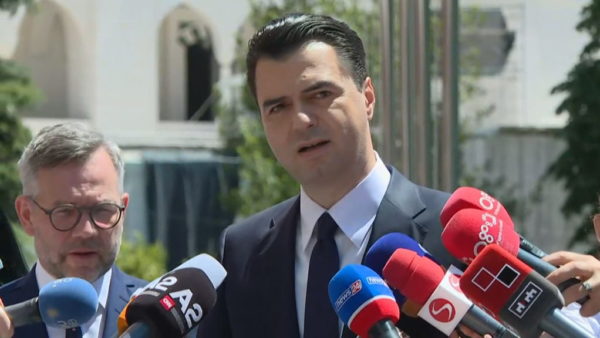 The leader of the Democratic Party, Lulzim Basha, met with the German Minister for Europe, Michael Roth. Basha declared that he informed him on the dramatic developments and the electoral massacre of April 25th, adding that Albania lost a golden chance to progress with the EU integration.

“I informed Mr.Roth about the dramatic developments and the electoral massacre of the April2 5th elections. Albania missed a golden opportunity to move forward with the country’s EU integration process. For me. The best chance for our country is the EU integration process, which is based on achievements and merits. Unfortunately, Albania was left behind for the past eight years. The opposition did everything possible by giving consensus for the judicial reform and the electoral reform. Unfortunately, the government violated both of them”, Basha declared.

MInsiter Roth invited the government and the opposition to find common ground and constructive language.

“We trust the ODIHR assessments, which tells us about the electoral process. I agree with Mr.Basha when he says that the future of Albania is I the EU. Whether this path will be successful depends not only on the government, but also on the opposition and the Parlaiment. I wish the government and the opposition can find a constructive tone. In a democratic system, the parliament is the place to hold debates. The European Commission has carefully assessed the fulfillment of the conditions for starting the EU accession negotiations and has come to a positive conclusion in this regard”, Roth declared.