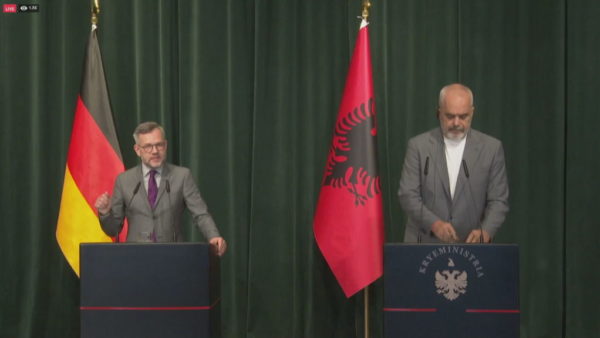 In a joint press release with the German Minister for Europe, Michael Roth, the Albanian Prime Minister mentioned the issue of Albania’s free movement with the EU countries.

He declared that the most important thing for the moment is the first intergovernmental conference, free movement with the EU countries of the people who have received Chinese or Russian vaccines. Rama asked the German Minister’s help on this matter.

“Much more serious than the postponing of the decision to approve the negotiating framework of the first intergovernmental conference, would be preventing the citizens of the Balkans from traveling to Europe normally, by dividing them into two categories: those who have received Western COVID vaccines and those who received Eastern vaccines. I hope that this does not happen and I hope that you and your other friends can help us convey this message. There is no reason to divide people into categories when it comes to their right to free movement based on the rules”, Rama said.

In the joint press release with the German Minister for Europe, Michael Roth, the Albanian Prime Minister, Edi Rama, commented on the issue of the free movement of Kosovo citizens in Eu countries. Rama said that the European Union is withholding Kosovo just like in a game of chess when an important piece blocks the path of a pawn.