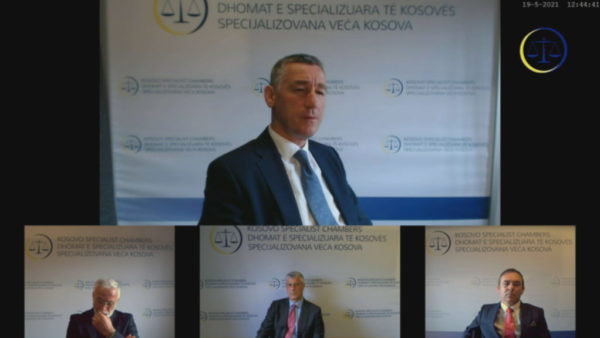 The Special Court of Kosovo held the fifth session for the case against former members and commanders of the Kosovo Liberation Army.

Hashim Thaci, Kadri Veseli, Jakup Krasniqi and Rexhep Selimi held the same stance as before, without issuing any declaration. They were defended by lawyers through video-calls.

This hearing was focused on exchanging documents between the Prosecution and the defense.

The lawyers of the former KLA fighters objected that they had not received complete information on the materials provided against their clients.

Thaci, Veseli, Krasniqi and Selimi are charged with war crimes, as the Special Prosecution is collecting materials for evidence.

The defense lawyers had a harsh discussion with the Prosecution, which underlined that they are not ready to start the trial. After this situation, the defense asked for the defendants to be released.