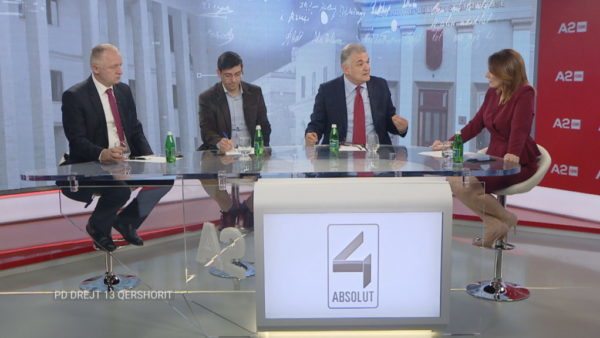 Çlirim Gjata, the Democratic Party Secretary for Legal Matters, declared on “Absolut 4” that after the April 25th elections, it is impossible to act based on the western standards, when standards in Albania are different.

“In order to act based on the Western standards, the situation should also be such. Not when someone enters violently into government and you are asked to carry the blame. It is impossible to accept that. In the last elections, we were asked why we didn’t denounce the violations earlier. We did it this time. There were criminal reports at the Special Anticorruption Prosecution. We had seen all the signs of what was about to happen. Criminals don’t take their own children or children-in-law without knowing that they will take votes”, Gjata declared.

For analyst Lutfi Dervishi, a resignation is a personal act. The issues with the elections are being used to avoid responsibility. According to him, April 25th is the cost that the DP is paying for deciding to stay outside the system, two years ago.

“The resignation is a personal act. It is also based on history, such as the internal matters of the structures. The electoral issues are being used to avoid responsibilities. Basha was asked several times before the elections whether he would resign in case of a loss, and he always evaded that question. This is a difficult moment because this is one of his multiple losses. April 25th is the last price that the DP is paying for the disoriented decision of two years ago. Renouncing their parliamentary seats was a wrong calculation. There are more reasons today to choose a radical stance, but the DP has already exhausted them”, Dervishi declared.

Gjata: The new mission of the Democratic Party is to break down the cooperation between politicians and crime

The Democratic Party Secretary for Legal Matters, Çlirim Gjata, declared on Absolut 4 that the battle of the Democratic Party for free and fair elections has moved to another phase, a mission to break down the cooperation of crime with politics.

“This historical moment is the battle for free and fair elections. It has moved to another phase right now, which has very rare precedents in European countries, mostly in the East: moving from small disagreements to refusing to accept the result. We are not at that phase right now. We are in another phase, the cooperating of the political class in power with crime and mafia, such as the case of “patrons”, or how the ruling party used the entire public administration to their service. It is a mission of the Democratic Party to destroy this”, Gjata declared.

He adds that even in the internal discussions, the DP agreed that the April 25th elections were stolen by the cooperation of PM Rama and Tom Doshi with the organized crime.

Dervishi: DP lacks of an internal analysis. Albania doesn’t have the culture of circulating political leaders

Analyst Lutfi Dervishi declared on “Absolut 4” that the Democratic Party is lacking of an internal analysis.

“If the Democratic Party claims that there is an electoral massacre, they should make a diagnosis of the entire process through legal methods. They must wait for the OSCE/ODIHR report. But the DP is lacking of an internal analysis”, Dervishi declared.

According to Dervishi, Albania also doesn’t have the culture of circulating political ellites.

“In the West, when a party wins the elections, it’s not the entire party getting into power. The party sends a governing team and then the party continues to prepare for the new elite. IF they lose the elections, those who were in government don’t take over the party. It is up to the new team that was prepared. This doesn’t take place in Albania because elections are contested. By contesting elections, leaders avoid political responsibilities and not circulating elites”, Dervishi declared.

Kalemaj: Albanian parties have failed with the process of internal democracy

Analyst Ilir Kalemaj declared on “Absolut 4” that our political parties have failed with the test of internal democracies.

According to Clirim Gjata, the Secretary for Legal Matters at the Democratic Party, circulating elites doesn’t mean to let one go and bring another one. That’s a philosophy.

“Circulating elites is a philosophy, with platforms and programs. The program we brought has not been rejected. It has actually been supported with votes. The concept of circulating elites is very good, but it requires its political moment”, Gjata declared.