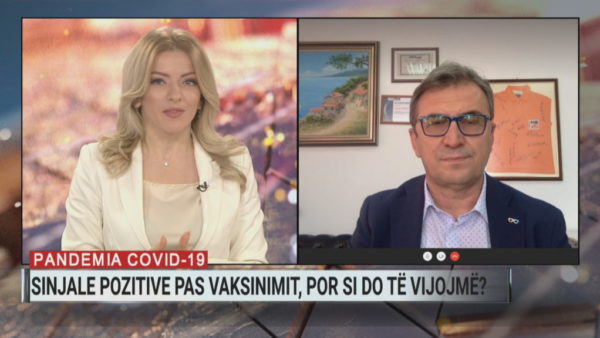 The Head of the Albanian National Emergency, Skender Brataj, was today’s guest on the midday news edition of A2 “Ditari”.

Brataj was optimist about the current situation with the coronavirus, especially after the fact that European Medicament Agency is reviewing the Chinese vaccine for deciding whether it will be authorities. This would be good news for Albania, which made a wide use of this vaccine.

“The Chinese vaccine was produced with the traditional platform. The efficacy of vaccines varies. There are no studies to show which vaccine is more effective than another. It is true that the Chinese vaccine has a lower efficiency level, but when vaccines are over 50% effective they are considered good. No vaccine can protect the human body at 100% against the virus”, Brataj declared.

“EMA is considering the Chinese vaccine, which means that this is a positive step. It means that it is effective, because they wouldn’t take it in consideration in vain”, he added.

For the Head of the National Agency, the situation will remain calm in Summer but a slightly higher number of new cases may be expected in Autumn. The country is expected to leave the pandemic in the Spring 2022.

When asked whether the Albanian citizens could be penalized by the Chinese vaccine for travelling in the EU, which will allow only people vaccinated by EMA approved vaccine brands,  Brataj said that this will depend from one country to another.

“Those who aren’t vaccinated will be able to present their test results, such as younger ages that haven’t taken the vaccine even in the EU, as long as it is not obligatory. The human rights cannot be violated within the EU”, Brataj declared.