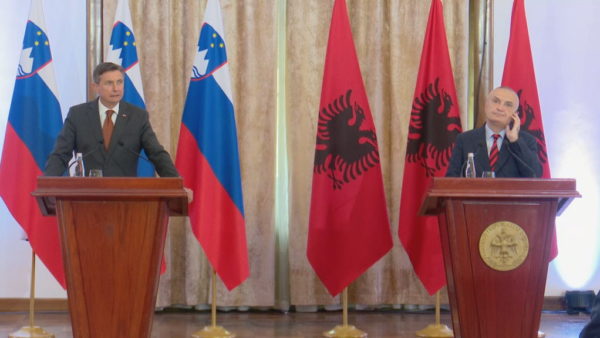 The theory for a possible border exchange between Serbia and Kosovo has created concerns in Slovenia as well.

In his official visit in Albania, the Slovenian President, Borut Pahor, declared that the Western Balkans should be integrated into the EU so that the border issue can no longer create problems.

“They shouldn’t take in consideration only the specific countries that are negotiating, but the entire Western Balkan region. With this approach, the significance of debating border changes in th Balkans would diminish. In my opinion, this process cannot possibly end peacefully. By joining the EU, the borders between countries are made less significant and there is no change. We now from experience that changing them I this part of Europe cannot be done without sacrifice”, Pahor declared.

Slovenia will take the Presidency of the EU for the next six months. For the Albanian President, Ilir Meta, this is a good sign for Albania’s EU path.

“I want to thank President Pahor for his efforts to encourage the EU towards a quicker geopolitical approach for the accession of the entire region”, Meta decalred after the meeting.

The President of Slovenia is in Tirana for the organization of the next Brdo-Brijun meeting between Slovenia and six other countries of the Western Balkans.