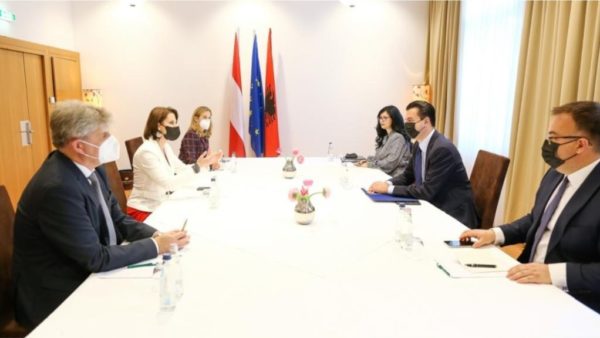 The Democratic Party leader, Lulzim Basha, met with the Austrian Minister for the EU and the Constitution, Karoline Edstadler.

The focus of this meeting were the April 25th elections. Basha said that the government, in cooperation with incriminated persons, have altered the will of the voters.

The DP leader underlined his readiness and that of the Democratic Party to carry on with the battle for bringing back democracy and change in Albania.

“The electoral massacre of the April 25th elections was the main topic of conversation. The government-sponsored vote altering campaign, in collaboration with persons under investigation for complicity in organized crime, persons who are blacklisted in the US, or with relatives who have been removed from power by the decriminalization law. Today they are part of the Socialist Party list of MPs”, says the press release of the Democratic Party.