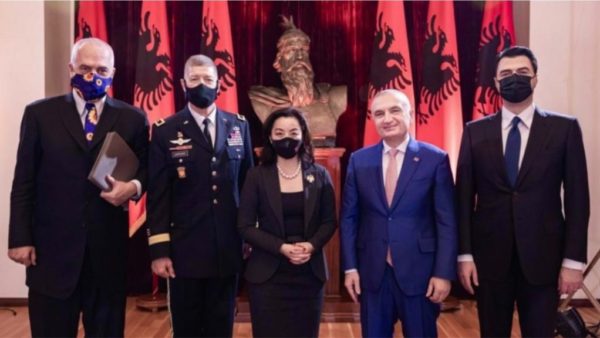 After meeting with the Democratic Party leader, Lulzim Basha, the US Ambassador, Yuri Kim, declared that the US don’t support any party or candidate in Albania.

Kim underlined that she met with the opposition leader and the Albanian Prime Minister, Edi Rama, and President Ilir Meta.

Kim said that the USA support the citizen’s right to have free and fair elections.

“I met with the DP leader, Lulzim Basha, the same way I met President Meta and Prime Minister Rama in the past 48 hours. We reiterate that the USA don’t support any party or candidate. But we support the right of all Albanians to have free and fair elections”, Kim wrote.

“It is unacceptable for anyone to threaten that citizens will take up “pitchforks” on April 25 or if they don’t like the result of elections. These threats deserve condemnation. Those who incite violence will be held responsible for the results of their words and actions. Stop”, the US Ambassador declared on Twitter.

The President of Albania reacted immediately during an interview on Syri TV.

“I embrace the Ambassador and call her to stop interfering with Albania’s interior affairs. My advice to her is to stop meddling with the internal affairs of Albania in such a one-sided way. The declaration of Yuri Kim is a shame and I invite the Ambassador here in the studio together with Edi Rama to get a debate in front of the Albanian people”, Meta declared.