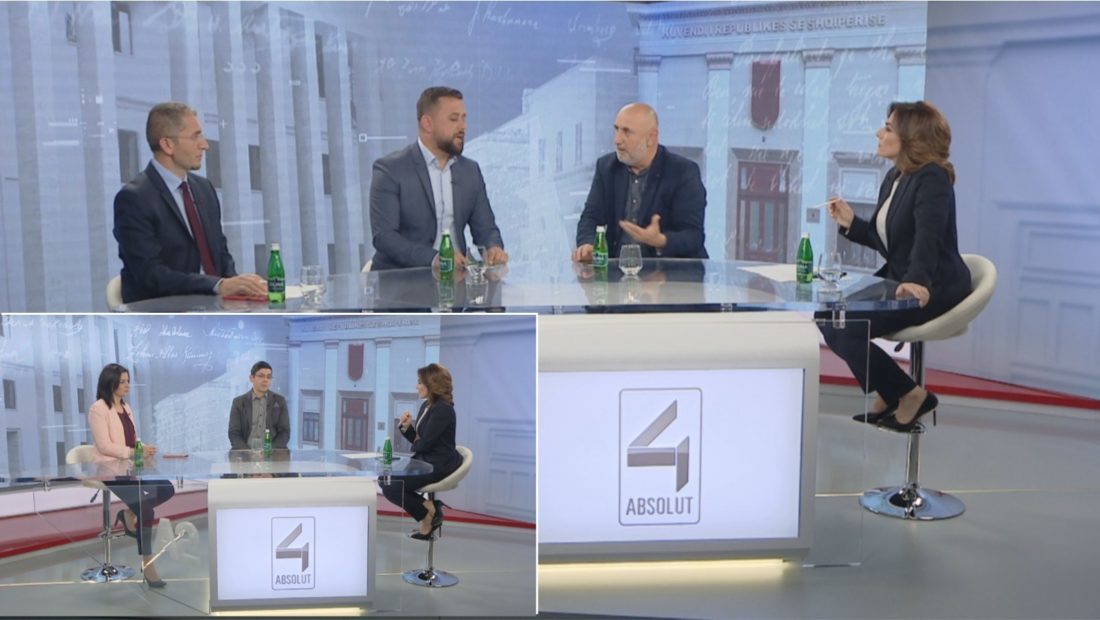 Who fired the first shot?

“Absolut 4” focused this episode on the tragic event that took place in Elbasan. Political activists confronted each other in an armed conflict, which led to one death and four persons wounded.

For the A2 CNN journalist, this is a serious event, with a strong political background. The police should have made more transparency on the case, but 24 hours after the shooting it has been very silent.

“The police should have clarified who fired the gun, if there was some shooting from the Socialist Party supporters or the former RENEA agent. Nothing was made public regarding the dynamics. I asked the Chief of Police who fired first and their response was that the investigations were undergoing. This is a very sensitive case and the police is not giving enough information”, Kasapi declared.

Hadarmataj: Police and the Prosecution are involved in manipulation, a new Prosecutor is needed

“Police has been involved in an apparent case of manipulation. The Prosecution of Elbasan is part of this and should not be involved in the investigation”, said the former Chief of Police, Arben Hajdarmataj, regarding the shooting in Elbasan.

According to Hadarmataj, police has the legal obligation to inform and not leave the media and citizens wander in doubts.

Bajrami: Police didn’t confirm whether their agents interfered or not

The A2 CNN journalist, Armand Bajrami, declared that the official declaration of the police showed that one of the persons who were wounded in the conflict was an officer of the police.

He said that in today’s press release, the police didn’t give information on the role held by the police in this conflict, who have apparently been present.

“The police also didn’t confirm the concrete actions taken by their agents. They have a legal obligation to act on such situations”, Bajrami declared.

Arben Hajdarmataj, former Chief of Police, explained on “Absolut 4” that the Vote Protection Structures are not criminal groups.

“Mr.Gazment Bardhi mentioned the term ‘structure’. But a well-organized structure is something else. Former police officers, now working with the electoral HQ, are another thing. Every citizen has the right to be part of electoral HQs. Describing them as criminal structures, armed structures, are very excessive. These former police officers have been engaged only to gather information, process it and send it to the State Police, when they notice people who are trying to sell or purchase votes. The candidates cannot do it on their own”, Hajdarmataj declared.

“This is unacceptable. The DP representatives have often confirmed in this studio the existence of these structures. This means that you don’t trust that the Central Election Commission and the Police will protect the vote. It seems as if an occupier will come and steal the votes. This is much different from what a campaign should be and this goes against the Democratic Party. They did not trust votes in 2017 and they took other steps. I am confused about this and I am not the only one”, Gjonaj declared.

Kalemaj: DP Vote Protection Structures give the message that they will protect the vote integrity

Analyst Ilir Kalemaj explained the situation with the elections of 2017, when the DP received the control of several ministries, but yet they had no control on the vote purchase.

According to him, these structures will give the voters a message that the integrity of their votes will be protected.

He underlined on Absolut 4 that votes in Albania are not stolen through the ballot counters. They are purchased months earlier through other mechanisms.

According to experts, the harsh language used in the campaign shows that the result is very close.