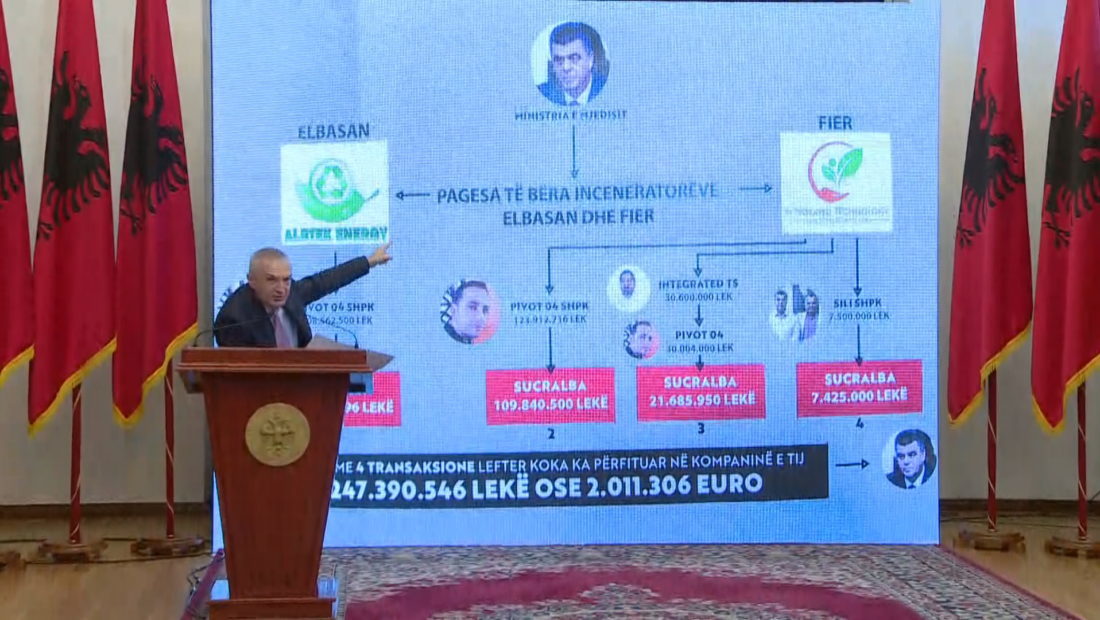 The President of Albania, the founder of the Socialist Movement for Integration, held an extraordinary press release today in which he accused the former Environment Minister, Lefter Koka, of buying votes in Durres on behalf of Edi Rama.

The President presented a scheme in which was shown how Lefter Koka has favored illegally, with millions of Euros, companies that he has created with his own people.

“The people of Durres know why there is tension in their city. Durres hates gangs. Cannot stand them. There are three gangs pressuring the citizens in Durres. Vangjush Dako with his Durres and Shikaj gang, buying votes with the help of the police; Ard Cela from the Albanian Energy Corporation, and Lefter Koka, with his son and his gang, who should be in prison. They are terrorizing the men and women of Durres, and everyone else.

“So that the people stop voting the Socialist Movement for Integration, which made him a Minister (Koka was Environment Minsiter under the SMI), which kept on its shoulder the burden of Koka’s corruption, and the gangster behavior of his son, who roams the streets armed and without a permit, knocking door to door and pressuring people by order of Edi Rama”, Meta declared.

“Their concern is to steal the votes of the Socialist Movement for Integration. Because the more SMI grows, the more the dying leaves will fall from the tree. This has been filed at the Special Prosecution Against Corruption. The international partners should know it as well”, Meta declared.

The Socialist Candidate for the Durres District, Lefter Koka, reacted with a harsh declaration after the accusations launched by President Ilir Meta, who said that he is buying votes and terrorizing the citizens of Durres.

He said he regretted that he had trusted Ilir Meta’s party for so many years with the votes of the Durres citizens, which will now go to the Socialist Party and Edi Rama, according to Koka.