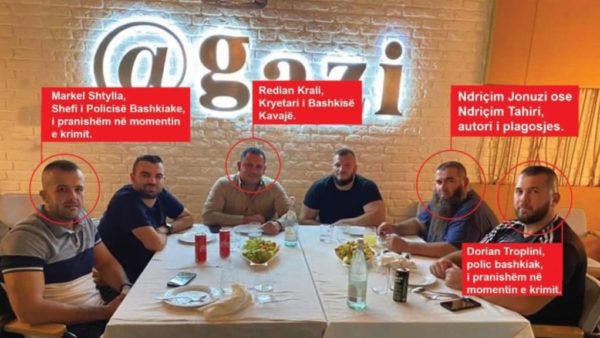 The Democratic Party of Albania published a picture showing the suspect of the firearm attack inside their electoral offices in Kavaja dining with members of the city’s Municipality, including Mayor Redian Krali and two other persons also wanted for the incident, Markel Shtylla and Dorian Troplini.

“Rama only offers lies and manipulations. None of the suspects has been arrested so far. He cannot escape with lies. All facts show that the aggressors are his people and they have acted intentionally. This is a criminal act against our democracy from a person who is now certain that he is going to lose the elections. We are going to win this Sundaty. We are going to bring the change Albania so much needs”, the Democratic Party reaction says.

Jonuzi had declared a few hours ago that he has been historically a supporter of the Democratic Party, and that the incident was not politically motivated.