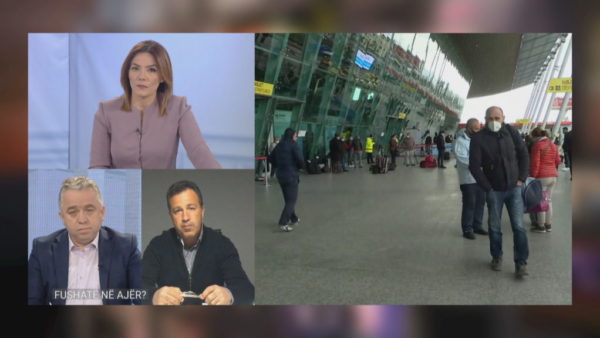 The Albanian Defense Minister, Niko Pelehsi, declared on Absolut 4, A2, that he doesn’t know who the Air-Traffic Controllers are, since he tasked the Minister of Infrastructure for resolving this issue and replace them.

Peleshi declared that he held a meeting with the Civilian Defense Committee for this matter.

According to Peleshi, the strike compromised the safety of an object of utmost importance for national security. This has increased the government’s vigilance. He considers it a civilian emergency since there are many citizens who are still wandering around European airports because of the situation in Tirana.

“I am the defense minister and I have carried out the responsibilities of this constitutional position. The safety of an object of utmost importance has been compromised. It is a critical border connection object. It is the only aerial gate to Albania. We have the responsibility to secure the perimeter of this airport with military police. We increased our vigilance and nothing more. We have citizens who are still wandering around in European airports. This is a civilian emergency”, Peleshi declared.

Asked by Afrim Krasniqi whether the government’s accusations gave the situation a political nuance, by also refusing to meet the air-traffic controllers and proposing to import foreign controllers, Peleshi responded that the government and its institutions are not the cause, but the consequence. “No government in the world is interested in having crises”, Peleshi declared.