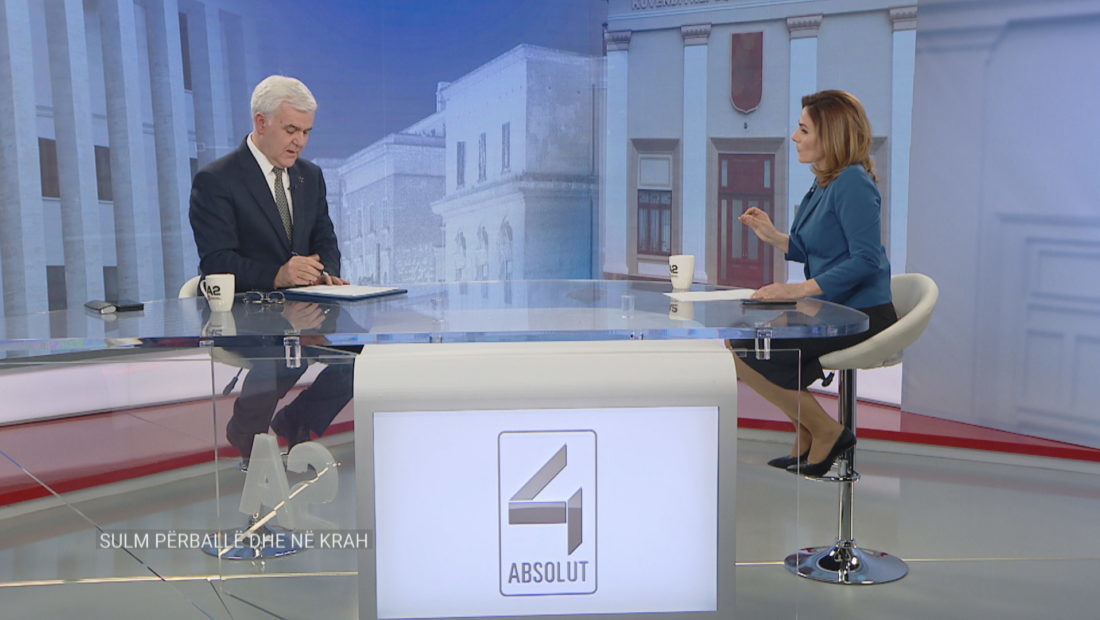 The Socialist Party candidate for Tirana, Fatmir Xhafaj, was today’s guest on A2’s “Absolut 4”. Xhafaj declared that he sees his position as the 23rd candidate on the list as a challenge.

The former Interior Minister said he was prepared for this ranking, after the passing of the electoral law, which allows competition within its own kind.

Xhafaj explained his meeting with the Mayor of Tirana, Erion Veliaj, who updated him with the formula chosen by the Socialist Party and confirmed that he was beyond the frontline. According to him, this is a challenge he is optimistic about. He reminds how many challenges he had to endure in opposition, when Berisha was running the country, but also as Interior Minister.

Xhafaj: The earthquake and the pandemics were managed in the best way possible

Former Interior Minister Xhafaj declared on Absolut 4 that the earthquake and the pandemic were important challenges for the majority, which, according to him, were managed in the best way possible.

“The only responsibility of the majority was reaction and management. The citizens are aware that these challenges were managed in the best way possible. It was not easy to face two challenges like these within one single term. These disasters have taken most of the government’s energies during this term. This doesn’t mean that the majority has neglected its commitments. We have continued with important reforms in the energy, infrastructure and judiciary”, Xhafaj declared.

“Citizens must turn into a barricade for fair elections. It will not be easy. It is a responsibility of the political parties”

“It will not be easy, but it is up to the political parties to hold free and fair elections within the democratic standards, in respect of the citizens”, said the Socialist Party candidate for Tirana in the April 25th elections.

Xhafaj underlined that the citizens have the chance to vote for the subject and the candidate they desire. For them, this electoral system allows more freedom of choice.

“I hope that these elections  will be free and fair, within the democratic standards that we deserve as a NATO member, and as members of the European family, where the freedom of choice and standards in the elections are a normality. Previous incidents make you think that this won’t be easy. But it is up to the parties to conduct this race by respecting the citizens’ hope to freely express their verdict”, Xhafaj declared.

“The citizens have the possibility to use a vote with double power: they can vote for the political party and also for their favorite representative in Parliament. This gives us more freedom in the elections”, the former Interior Minister added.

Ballot design, Xhafaj: Names on the ballot would be more positive than numbers

“Having names on the ballot would be more positive. I don’t know how it could be realized, from the technical point of view. Now it’s a done deal, but I think that citizens have the maturity to understand that after any number there is one person. They have the freedom and chance to choose the candidate they prefer. Now it is up to them”, Xhafaj declared.

Xhafaj thinks that the political parties have the responsibility to distance themselves from the electoral crime.  But he adds that citizens must tun into a barricade against such phenomena. He underlines that the government institutions also have a very important role in this matter.

“Electoral crime is complex, but the main responsibility goes to the political forces and their leaders. The citizens have the chance to become a barricade against such phenomena, because they are more than involved. It is about governing their families in the next four years. They must report abusive cases to the authorities. Justice institutions have an important part in this. They used to be independent only on paper, but they were affected by politics. That’s how the system was built. The new justice institutions and the Special prosecution Against Corruption should have more transparency as regards the communication with the public. They should be more active”, Xhafaj declared.