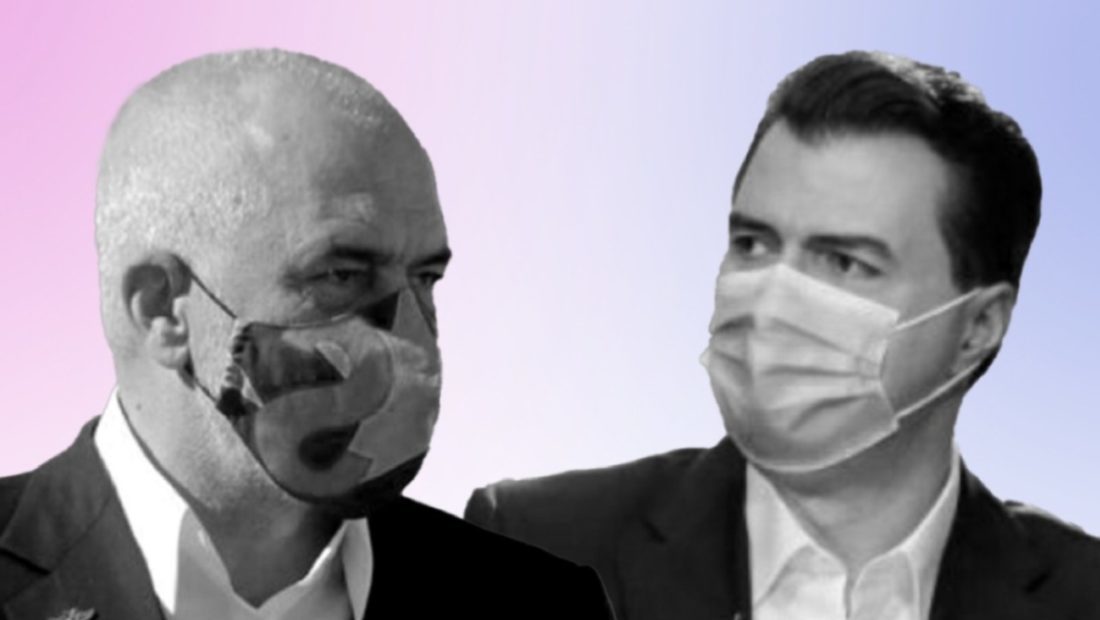 The Democratic Party leader, Lulzim Basha, continued his campaign in the area of Durres. He met with representatives of the communities that have settled in the area.

After being updated with the problems that citizens are facing, Basha promised that a new government led by him would serve to them, not just a small group of people.

“Urbanization is very important. When we say urbanization, it’s not just roads. It’s also about aqueducts, sewer systems, street lights. Unfortunately, the money used for facades during these eight years would have been enough to urbanize this area twice”, Basha declared.

As regards doctors and teachers, the DP leader said that by doubling their salaries he would stop them from abandoning the country.

The Albanian Prime Minister, Edi Rama, visited the city of Pogradec today. He criticized once again the opposition leader for not respecting  the COVID-19 social distancing measures during his political meetings.

Rama said that for the mass vaccination to be effective, they must follow the simple measures that are imposed against the pandemic.

“I have reiterated this each day. Unfortunately, some people see it as politics. There is even worse. Others see it as an expression of jealousy. Of course, any party can gather people in masses, especially a party likes ours. But it is irresponsible, under this pandemic, when vaccination is a fatal weapon against the invisible enemy, if it is not accompanied by social distancing”, Rama declared.

The Democratic Party leader, Lulzim Basha, signed an agreement with the Medical Plants Association in Malesi e Madhe, to give them a €100 mln in subsidies.

“Our commitment is to offer a €100 mln in subsidies for farmers, breeders, based on the production and the cultivation area. The fund will be disbursed through a digital mechanism, by eliminating any bureaucracy”, Basha declared.

Rama in Vlora: Let’s see an “earthquake” with the April 25th elections

The Albanian Prime Minister, Edi Rama, told the SP coordinator in Vlora, Daminan Gjiknuri, that he wants to see an “earthquake” with the April 25th elections. Rama referred to a quote from Gjiknuri that went viral time ago.

In a Facebook video, Rama was seen communicating with Gjiknuri.

“Are you making an earthquake in Vlora, or not?”, the Prime Minister asked.

“I want to see victory and say that word once again”, Gjiknuri answered.

The leader of the Socialist Movement for Integration, Petrit Vasili, is ranked third on the candidate list in Tirana. Today’s guest on “Dita Jone”, on A2, Vasili spoke about the campaign and what they expected from the April 25th elections. According to him, this is the most beautiful campaign held by the opposition.

“This is one of the most beautiful campaigns held by the opposition. This is a battle with programs that makes a clear contrast from Rama, who only insults the opposition. People have two different approaches to politics: a responsible stance in one hand, and another one without ideas, that only wants to stay on power”, Vasili declared.

“We are an opposition imposed by the stories. The way how we entered the elections allows us to maximize votes”, Vasili declared.

As regards the SMI’s projections for the election outcome, Vasili said they expect 11 seats in Tirana.

Republican Party: There’s no bigger shame than a government that plays with its citizens

Fatmir Mediu, the candidate representing the Republican Party in the “Alliance for Change” coalition, held meetings with citizens and businesses at Tirana’s Municipal Unit 7.

Mediu underlined the property issues, the legalizations and promises that this government didn’t keep.

“There’s no bigger shame than a government that plays with its citizens. After 30 years we are still discussing whether their properties should be legalized or not. This is the government that was built in these eight years. There’s no distinction among left voters or right voters. Everyone suffers of unemployment and the inability to have a government that can treats them equally”, Mediu declared.

Democratic Conviction, Patozi: Women have a great role in politics

In a meeting with the women of Tirana, the leader of the Democratic Conviction, Astrit Patozi, focused on the significance of gender equality in politics.

According to Patozi, women should always be represented by the Albanian politics.

“You can tell how developed a country is by looking at how they treat women. This also applied to parties. I believe that we are very honored that women are equal to us, not only in representation but also in other attributes and equal rights”, Patozi declared.