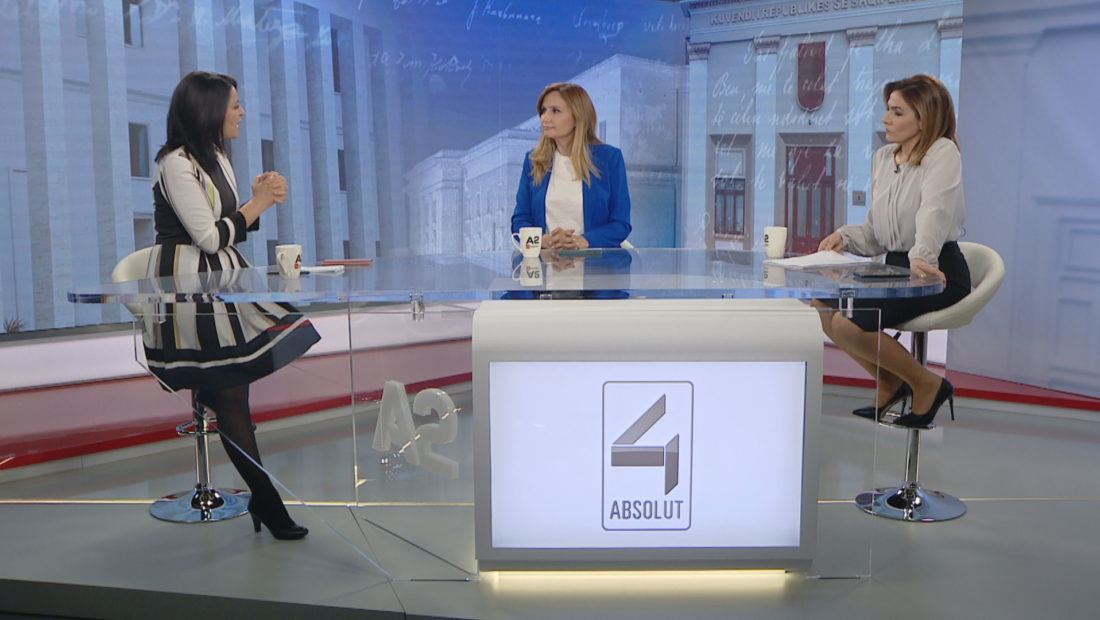 The Democratic Party candidate for Tirana, Jorida Tabaku, declared A2 “Absolut 4” that these elections are seeing two different realities in front of each other.

Tabaku declared that the DP comes in these elections with a clear program, with 500 pages drafted by 600 persons. As for the majority, according to Tabaku, they offer only verbal attacks.

“The Socialist Party has worked for propaganda in these years. The citizens have built some kind of mistrust. They came in 2013 with huge promises. People were skeptical because none of those promises were kept. What people are asking us in this campaign is whether we are going to keep our promises. Where are we going to find the money? Will there be hope again? Our program is 500 pages long. It was presented by a team for each sector, all experts. More than 600 people were involved in the drafting of this program”, Tabaku declared.

“Mr.Basha is the candidate for Prime Minister. The DP is working to get votes for the party, not for the candidates. I think that this matter is getting more attention than it should. On the other hand, we have only verbal attacks. No concrete program just recycled promises that weren’t kept. There are two offers that have no similarities with each other. I understand that citizens are skeptical. They are tired. They are disappointed in the past eight years”, Tabaku declared.

Is the Democratic Party violating the pandemic rules?

Jorida Tabaku responded to the accusations of PM Edi Rama, who said that the Democratic Party is breaking the anticovid regulations with its meetings, considering them “sources of infection”.

For the Democratic Party MP, this is not true. The DP is implementing all laws against the pandemic. However, she added that they cannot remove the citizens who join Lulzim Basha in marches.

“This is hypocrisy. All Socialist meetings are like that. They are organizing dinners and meetings. We don’t make any notification for the meetings that our leader holds. We have a plan. Many citizens gathered today in Tirana. The citizens come on their own will. The Democratic Party respects all laws, all measures. Everyone keeps masks. We keep the social distancing. But we cannot remove them. Wherever we go we make appeals to keep the social distancing”, Tabaku declared.

Krasniqi: The entire DP campaign is focusing on one single person. The SP campaign looks like a team of millionaires

According to Krasniqi, the opposition lacks a written program. They have created the idea that they are working for one single person.

“The campaign is still ongoing. We need to see how it goes. The opposition’s campaign is not a negative one. It is concentrated most on undecided voters, the main contingent that will make the decision. The opposition has tried to promote new figures, regardless of the age, to gain more trust”, Krasniqi declared.

“The opposition is lacking a written program. This hasn’t damaged the campaign but has focused it on the verbal exchange. The general impression is that the opposition is fighting for a prime minister. The entire campaign goes to one person. The oppositions try to give the impression that they are a team, each time they want rotation. We don’t see the concept of a team yet. We see a figure that moves around. We don’t see the other members of the hierarchy and who should have a role.

“The other element is that we have two different lines of statements. The first one is the official one, which is normal. Then we have another line that comes from other individuals who have other methods.

As for the Socialist Party, Kranisiqi declared that it is like a team of rich people who are getting to know Albania.

According to Krasniqi, the Socialist Party doesn’t have a program and their only strategy is to get the votes of militants and public administration workers.

“This is the second term of the Socialist Party. A term made for consumption. The Socialist Party is tired and has lost its energy. They are using the pandemic and the earthquake as arguments. but the Albanian citizens voted for a program. This is when they should answer for the implementation of that program”, Krasniqi declared.

Infrastructure Minister: The reconstruction process has not been made for votes, it started more than one year ago

The Minister of Infrastructure, Belinda Balluku, denied the accusations that the reconstruction process for the houses damaged by the earthquake is being made to get votes for the April 25th elections.

According to her, the reconstruction started at a time when there were no elections. The Minister added that such a reconstruction process has never been undertaken before, by any other country.

The Albanian Minister of Infrastructure, Belinda Balluku, today’s guest on Absolut 4, gave details about the Kukes airport and the first airplane that is expected to land there on April 18th.

“We have delivered major projects that were started and were abandoned. One of them is the Kukes airport. The first airplane will land on April 18th, with 132 passengers, which is the capacity of Air Albania. It will be a promotional flight. The ticket will be free. The concessionary has offered this flight”, Balluku declared.

“They have called this airport a 3D project and many other things. But this airport is real. It will have airplanes landing. I am certain that every fight that has been started, from a playground to the airport, will be extinguished soon and no one will refer to the fact that there has been hard work there for two years”, Balluku declared.

Tabaku: What changed that Basha accepted to enter the elections with Edi Rama still a PM?

Jorida Tabaku, from the Democratic Party, explained what changed for the Democratic Party that they became part of the elections with Rama still as Prime Minister, different from what they said in 2017. According to Tabaku, the DP is running with Rama even worse than before, but with greater support from citizens.

“There has been extraordinary support. We are taking all measures to stop other effects that the SP usually does, such as vote purchase and the usage of criminals. Unfortunately, there are still many criminals on the lists or people with relatives who come from criminal organizations. We are taking all measures to identify them and report them, but also to reassure voters”, Tabaku declared.

The candidate from the Socialist Movement for Integration, Silva Caka, declared on Absolut 4 that her party aims for 10 temrs in Tirana, by improving this way the results of 2017.

Caka declared that paid polls are simply trying to pressure the SMI. But the strongest point of this party is the direct contact with its citizens.