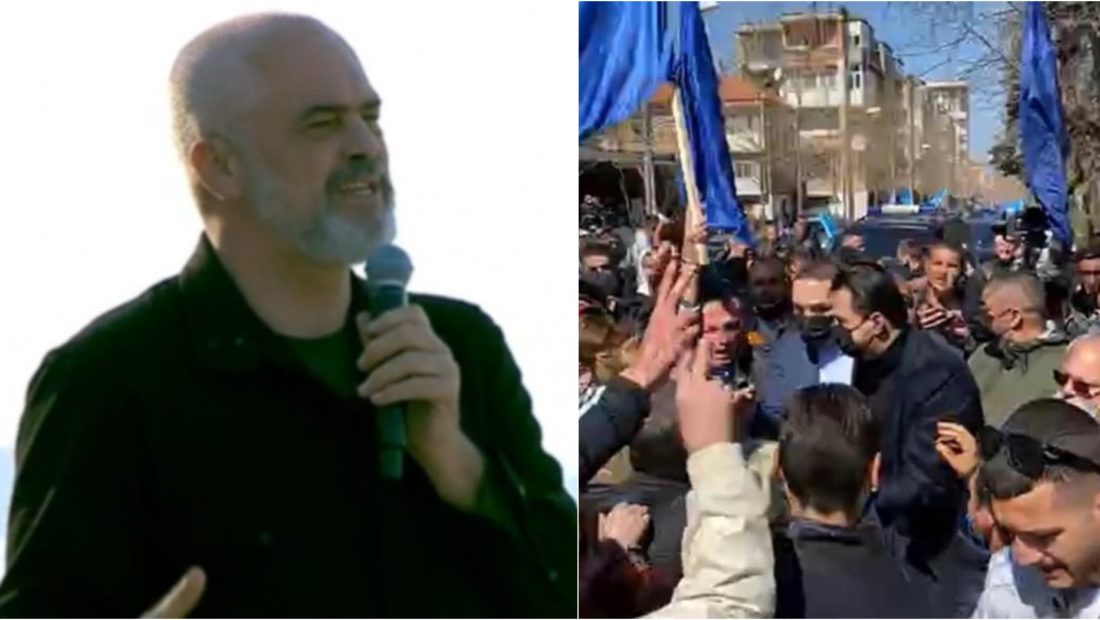 Basha met with citizens at the Ciflig village, near Korça, where militants blocked the Korca-Pogradec national road. Many of them then gathered at Korça’s main square.

For this type of meeting, Basha has been accused by PM Rama of violating the pandemic rules against massive gatherings.

The Albanian Prime Minister visited the biggest city of North Albania, Shkoder. He accused his opponent, Lulzim Basha, of not respecting the rules established by the authorities against the pandemic.

“The Romans used to say that making mistakes is human. Insisting for that mistake is diabolic”, Rama said as he commented on Basha’s meeting in Korca.

The Albanian Prime Minister declared that many people are right to ask why the government is not interfering to prevent any further spread of the virus. However, he added that the police cannot fight with a group of irresponsible people how have shown that they can do worse than that.

The Democratic Party reacted to Rama’s comments with a press release. “Feeling trapped by the panic of loss, Rama is concerned each day for the welcoming reception that Lulzim Basha is getting from the Albanian citizens. Rama has understood that Albanians want to change and no one can stop this”, the Democratic Party declared.

Rama criticizes the DP Mayor of Shkoder: An example of ignorance and backwardness

The Albanian Prime Minister, Edi Rama, accused the Mayor of Shkdoer, Voltana Ademi, of blocking their projects in the city and of failing to make any investment.

He asked the citizens of Shkdoer to vote for him. He said that the Socialist Party is in debt with this city, and they will pay it as soon as they get support.

“We are in debt with Shkoder, an integral part of our history, culture, and tradition. Shkodra has extraordinary potential. The cities that are undergoing a great transformation have nothing more than Shkoder. I am here to tell the citizens of Shkoder that if they want to give us the opportunity to pay our debts to the city, they must give us support”, Rama declared.

The Mayor of Shkoder, Voltana Ademi, reacted after the Prime Minister accused her of the way how she manages the biggest municipality in North Albania.

“He attacked me from Shkoder with the only language he knows: offense and insults. Shkoder, a city of culture and civility, has rejected the arrogance of power even during the repressive times of communism. They will certainly not accept it today. By attacking Shkoder, its citizens, and me as Mayor, Edi Rama only shows the fear and weakness of someone who is living his last days in power”, Ademi declared.