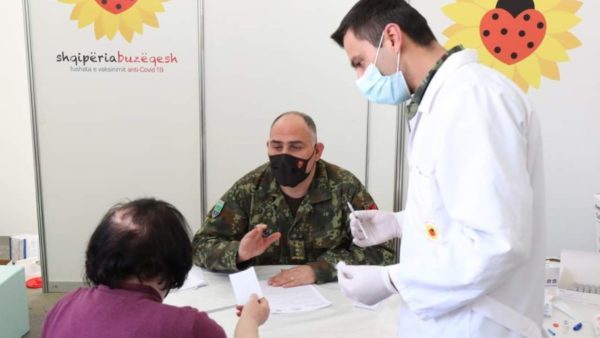 The Albanian authorities announced that 11 people have died of COVID-19 complications in the past 24 hours. The new confirmed cases for today were 304, after making 2730 tests.

There are 293 patients who are receiving treatment in hospitals, 11 under intensive care, and five using ventilators.

The Kosovo Public Health Institution announced that 14 people have died in the past 24 hours due to COVID-19 complications. 3892 tests were carried out today, 752 of which resulted positive.

Kosovo has confirmed 89,507 cases since the beginning of the outbreak and 1858 deaths.

Albanian Health Minister: Elder citizens will be vaccinated at home

The Albanian Prime Minister and the Health Minister observed the vaccination process today in Laç, Mirdita and Lezha.

Health Minister Manastirliu declared that more than 100,000 people have been vaccinated so far. Elder citizens who have mobility issues will receive the vaccines at home.

PM Rama said that the current goal is to reach 30,000 vaccinations a day.

Public Health Inspector: The Chinese vaccine is effective, there are chances to go back to normality

The Chinese vaccine “Sinovac” that is being used massively for elder citizens has yet to receive confirmation from the WHO. The Head of Infective diseases at the Albanian Public Health Institution declared that this vaccine, together with the three others that are being used in Albania, (Pfizer, AstraZeneca, and Sputnik V) reduce severe complications and deaths.

Although China is hermetic to other countries regarding Sinovac Data, Albania is referring to the efficiency that this vaccine has shown in Turkey, Brazil, and other countries.

The Military Nurses joined their civilian doctors to help with the vaccination of Albanian citizens.

The Military Nurses are currently vaccinating citizens over 70, in a mobile center installed at Tirana’s main square.

The government of Albania has approved the €10 mln payment for the purchase of the Chinese vaccine, which is being currently used for mass vaccination.

The 1 billion ALL fund for the vaccine was removed from the program for studies and projections.

The document, which enters into force immediately and is subsequently approved by the Parliament, also reveals that it was a Turkish medical company that showed interest in supplying Albania with Chinese vaccines.

The Turkish distributor will be paid by the Public Health Institution.

This is the second amendment made to the budget this year. The first one was made in early February, to cover the cost of the elections.

Berlin announced that they will stop using the Astrazeneca vaccine in people under the age of 60 after there were reports of 31 blood clotting cases.

Two German hospitals had suspended Astrazeneca for women under 55 due to the increased risk of thrombosis.

The European Medical Agency said a few days ago that the vaccine was safe and didn’t have fatal side effects related to thrombosis after a number of countries decided to suspend it.

Canada has also suspended Astrazeneca for people under 55.