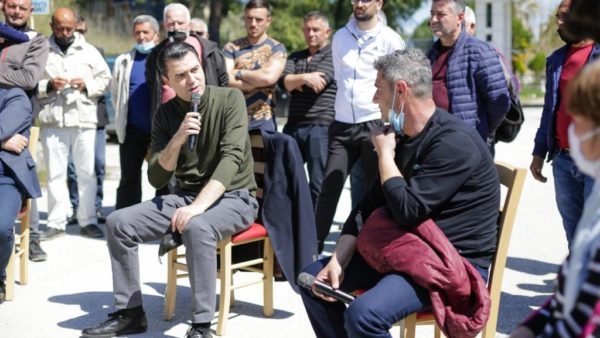 Basha in Fier: The wind of change can be felt everywhere

The Democratic Party leader, Lulzim Basha, continued his electoral campaign in Fier. Received by many citizens, Basha said that the wind of change is being felt everywhere, as he appealed to citizens to respect the COVID-19 measures.

“I can feel an extraordinary spirit everywhere, a wind of change that brings new hope for the future and that brings April 25th as a ray of light. Let’s keep respecting the conditions in this campaign and take the spirit of hope even higher. Albania will win. I have received messages from the best-known intellectuals that our country has. I will work for Socialists as well, for all Albanians”, Basha declared.

The DP leader met with many young citizens, including Socialist supporters. Basha declared that the Albanian youth is the only hope to bring the country out of the crisis. He appealed to them to stop emigrating and promised that after April 25th they will start training them for all sectors that Albania needs.

The Albanian Prime Minister, Edi Rama, declared that the new neighborhood in Lac will have all European standards and will fulfill every condition for the residents.

“This will be the most beautiful neighborhood in Albania. It is being reconstructed from the beginning”, the Prime Minister declared.

“The citizens who will live here will have parks, parking spaces, a mall, service units, a new municipality, the hospital”, declared the Mayor of Lac, Majlinda Cara.

Rama reacts to the Democratic Party meeting in Fier

After the footage published by the Democratic Party in Fier, PM Rama said that it shows the two different worlds that the political parties bring.

“We are continuing with the vaccination of all Albanians. In parallel, they continue the mass infection. They stay on their cars and let people on foot get infected”, Rama wrote on Facebook.

The Democratic Party responded by saying that Rama feels afraid by the Albanian citizens who want to bring the change that is so much needed.

“There are two options: a leader who works for you, who brings the change that Albania needs, who improves our lives. The other option is Rama, who failed for eight years and gave Albania to the oligarchs. Albania will win on April 25th and Rama will lose”, the DP reaction says.

The Albanian PM reacted again on Twitter: “I am afraid of the people who are being used as cannon fodder in your shameful gatherings, which show your irresponsibility. You are gathering people who are blind, letting the virus feast on them as Basha promises to turn the day into a nigh, a well-kept promise, unfortunately”, the DP declared.

Republican Party: We want a stronger economy, 70% of the youth wants to leave

The leader of the Republican Party, part of the “Alliance for Change” of the opposition, met with citizens and business owners in Tirana’s Municipal Unit 3.

In his meeting with the citizens, Mediu underlined the construction of a strong and efficient economy, by fighting corruption and the injustices caused by Rama’s government, which, according to Mediu, are destroying the Albanian state and the Albanian families.

“This is an anti-Albanian regime. It goes against families, against humans. More than 70% of young Albanians want to leave. This government has left no hope to our country, is pushing our youth away”, the Republican leader declared.

Jozefina Topalli from the “Movement for Change”: We don’t need foreign reports to know that our government is corrupt

Jozefina Topalli, leader of the “Movement for Change”, commented on the “Transparency International” report on A2’s “Ditari”. She said that one doesn’t need international reports to know that our government is captured by corruption and that laws are written for those who are interested.

“We need to remove this corrupted political class, tied with crime, which only thinks about personal economic agendas. The AI report reflects the economic and political reality of our country. This is why our citizens want to leave. There are three people responsible for this situation: Edi Rama, Ilir Meta, and Lulzim Basha. Only by vote, we can punish the corrupted class”, Topalli declared.

She accused the three party leaders of cooperating with each other because they fear the moment of transparency and need to respond before the law.

Astrit Patozi from the “Democratic Conviction”: Our program will bring normality to Albania

The coordinator of the Democratic Conviction, Astrit Patozi, explained on A2’s “Ditari” how his political force will bring change.

‘We have introduced a new program, our plan for a normal Albania. Right now Albania is mistreated. To have the Albania we dream about, we must complete the transition into a normal country. We are going to do this by imposing this change. If citizens support us, we are going to join the new majority with our conditions, which are enough to bring change”, Patozi declared.

According to him, change is not something miraculous, but a process that needs to be implemented.