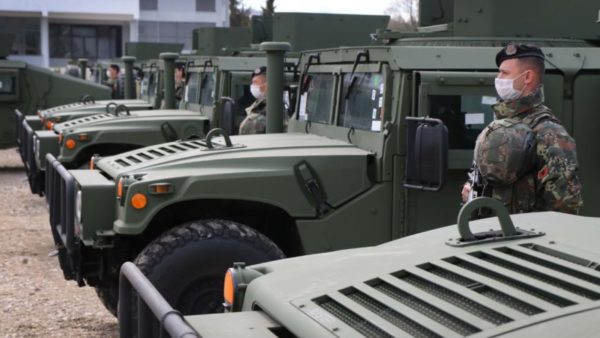 The 2nd Infantry Battalion of the Albanian Land Forces, a structure declared in the NATO, has received 29 new armored Humvees from the USA.

The Albanian Defense Minister, Niko Pelehsi, thanked the USA for the constant help in modernizing the Armed Forces and for training the Albanian officers.

“The material, technical and modernizing assistance of the USA has given our army more power and efficiency for internal and missions held abroad. They have been trained to successfully complete the entire specter of missions and obligations. This constant support has given more trust especially to our troops mobilized abroad, besides offering more security and dignity”, Peleshi declared.

The US Ambassador to Tirana, Yuri Kim, declared that the donation of these High Mobility Multipurpose Wheeled Vehicles contributes to turning the 2nd Infantry Battalion from a light unit into a mechanized one.

The US diplomat said she was proud that Albania is responding to its responsibilities by standing by the side of the USA, no matter how dangerous the missions are and no matter how far from home.

She considered the donation of the new vehicles especially important on the verge of “Defender Europe 21”, the largest military exercise in Southeastern Europe.