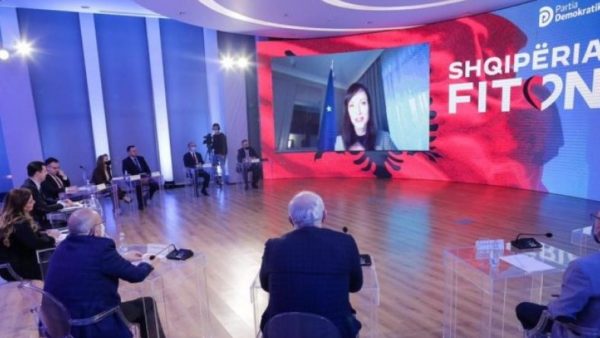 According to the Albanian Prime Minister, this is considered an interference in Albania’s internal elections. He asked Brussels for an official reaction.

The Spokesperson for the EU Commissioner Mariya Gabriel responded to an inquiry made by A2 News and declared that on March 18th she attended a Round Table of Education organized by the Vienna University.

“The attendance was limited to holding a speech. The speech was focusing on new and forthcoming European initiatives for education and scientific research, which are important for the Western Balkans, including Albania”, the Spokesperson for the EU Commissioner for Innovation declared for A2 News.

Rama: Someone from the EU must react, Commissioners interfering with Albanian elections

The Albanian Prime Minister, Edi Rama, reacted on social media after the video-conference realized a few days ago by the Democratic Party leader, Lulzim Basha, with EU Commissioners.

According to Rama, this is considered an interference with the internal elections of a country. For this reason, he demands an official reaction from the EU.

“Someone in Brussels should tell Commissioners who spend their time paid by the European taxpayers to make electoral video-chats with Lulzim Basha. This is called interference in the internal electoral campaign of a country that has an EU candidate status.

“To my knowledge, the European Commission does not have the habit to interfere with electoral campaigns. I expect to learn it officially and publicly from Brussels if I am wrong. Maybe Commissioners really have the right to join sides when European countries are electing their governments”, Rama wrote.

After the Democratic Party leader, Lulzim Basha, held a video-conference with EU Commissioners, the Albanian PM, Edi Rama, considered it an interference with Albania’s elections and asked the EU for an answer.

The first one to react was the Democratic Party leader, Lulzim Basha. He considers Rama’s nervous reaction as “strange”, while he says that he will do everything possible to progress with the country’s EU integration.

“I am grateful to the European Union and the European Commission for the assistance that has been given to our country, and that will continue. In eight years Rama not only did nothing for the EU integration, but even took steps back. I am determined to do everything possible in order to progress with the EU, in order to bring true change, qualitative education and decent employment for Albanians in Albania”, Basha declared.

“Rama’s nervous reaction is strange. I, the Democratic Party, and the Albanian people have determined our path since December 1990. That’s the path towards the EU. Everyone knows today that Albania will not be able to progress without getting closer to the EU”, Basha wrote.