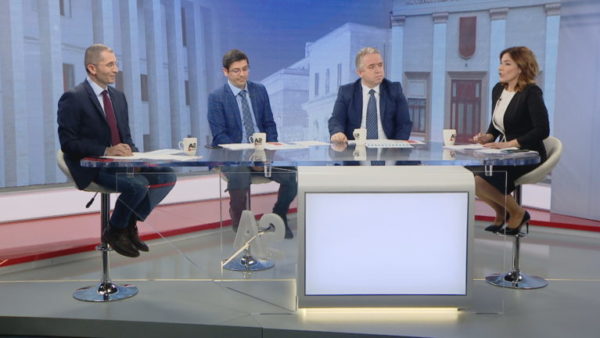 Analyst Afrim Krasniqi, head of the Institution of Political Studies in Albania, was tonight’s guest on Absolut 4. He discussed the electoral issues that are being faced by the biggest districts.

For Krasniqi, the district of Tirana, the biggest in Albania, has some interesting names that look like they are running for the first time. But when you take a look at their parents, they are very rich individuals, with a lot of influence, who are running to secure a Parliamentary seat.

“The votes in Tirana cannot be secured by gun, but by purchases, personal traffic of influence, and state resources. These elements make it hard to monitor and prevent manipulations. Tirana will have a huge rivalry within its own kind, as regards political parties”, Krasniqi declared.

“Another issue with Tirana is that the turnover is very low. It may reach 45%, at most. This increases the importance of the suburban areas. If someone cannot get 70% of the votes in Tirana, it will be easier in Vora and Rrogozhina”, Krasniqi declared.

Durres and Elbasan, the biggest districts with the highest electoral risk

The Institution of Political Studies Albania thinks that Durres is the district with the highest electoral risk, followed by Lezha, Shkodra, Tirana, Dibra, and Elbasan.

“Ironically, these are two university cities. It is surprising that the political leaders have chosen their criminal elements in these cities, people with strong financial and family ties”, Krasniqi declared.

A2 journalist Armand Bajrami declared that the ISP report goes in harmony with the opinion of the law-enforcing agencies in Albania.

“Durres is the city with the biggest port in Albania. It also serves as an entrance for narcotics. There are huge financial interests for criminal groups that control specific segments in the city. They want to be close to the government. This is what creates cooperation in Durres between political parties and incriminated elements”, Bajrami declared.

Analyst Ilir Kalemaj also underlined that Durres had the highest level of undecided voters. “It is a very heterogeneous district. They had a Mayor who is non-grata in the USA”, Kalemaj declared.

Elbasan, one of the districts with the highest risk

Afrim Krasniqi, Head of the Institution for Political Studies in Albania, declared that the District of Elbasan has the highest risk (98%), based on their recent study.

The conflict between MP Boci and businessman Luca makes it very clear what is going on there on the verge of the electoral campaign.

“The quietest candidate got in a fistfight that was caught by security cameras. Imagine how the situation could be behind the scenes. Elbasan is the typical case of known criminal groups that have enjoyed immunity due to the strong ties with politics. It is a great source of votes, a zone that votes for the Socialist Party, but probably the poorest in Albania. There is also a deformation with the representatives, related to the seats of the PJIU and the SMI. With so many factors, it remains a city where many things could happen”, Kranisiqi declared.

For journalist Armand Bajrami, Elbasan is a problematic city with many active criminal groups that have shown their political support.

“Elbasan is the main corridor for the drug traffic. Criminal groups want their own people in power to remain untouchable”, Bajrami declared.

Analyst Ilir Kalemaj declared that the new increased punishments on the electoral code regarding vote manipulation could bring more hesitation.

However, he underlined that the elections in Albania do not get stolen in the ballot boxes, but beforehand.

“The elections are bought and sold before we go to the elections. Sanctions for vote purchases, which is difficult to be used in courts as criminal evidence, is the Achilles heel”, Kalemaj declared.

A2 Journalist Armandi Bajrami underlined that the Special Prosecution against Corruption should start working right away, but the vote purchase process might be even more sophisticated.

“After being discovered by phone surveillances, there will be other methods. The people involved in vote purchases will be more careful. The Police should engage right now to prevent any vote purchase”, Bajrami declared.

According to analyst Afrim Krasniqi, the district of Lezha has a high risk for electoral issues. This is due to the high risk that comes from the mixing of local interests and the fragile balance between the main parties.

“In Lezha we don’t have individuals who are on the list of the incriminated people. We have to deal with a structure that has informal ties with businesses that are almost criminal in specific areas, and who are always recycled. Commissioners and representatives of electoral committees are the same individuals who have attended elections in areas that have always had problems. This makes every election controversial”, Krasiqi says, adding that the fight is fiercer in areas that have only one parliamentary seat.

For analyst Ilir Kalemaj the political parties have tried to lower the danger of Lezha with intellectual personalities such as Mark Marku and Lindita Nikolla. “However, there could be issues from within the party. Lezha has had the highest number of criminal offenses among officials in the past four years: 133 officials who were charged. All of them were found not guilty, all of them are now part of the game”, Kalemaj declared.