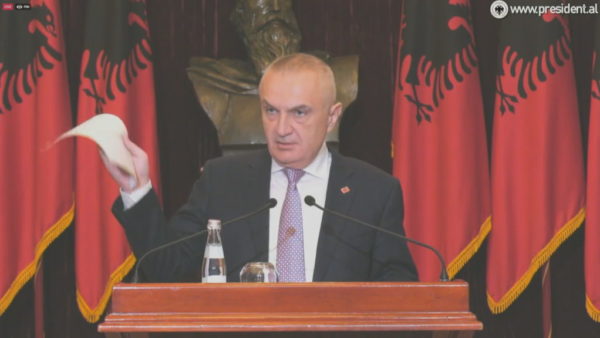 The President of Albania, Ilir Meta, explained the incident that took place at the offices of the New Democratic Spirit in Tirana. Meta said that the attacks against the NDS are a violation of the Constitution.

“The action of the municipality is a clear violation of the human rights and undermines the democratic spirit that should characterize all subjects. The NDS had received a letter that had no origin, no stamps, no protocol number, which made it look like an official act to justify visibly arbitrary acts”, Meta said.

“It asked the NDS to free the premises, as they had their electricity shut down. The leader and some officials of the NDS were blocked inside the offices. I changed my agenda and visited the NDS Headquarters. When we got inside, the door of the building was surrounded by police with uniforms, as if it was a crime scene, rather than a legal party headquarter”, Meta said.

The President appealed the people to protect their votes. He said that no one should expect a perfect president. But the duty of a president is to defend the Constitution.

“The president has a clear plan. Every vote should represent the citizens of Albania. The citizens of Albania have not exerted their rights. They deserve economic rights, property rights. Every Albanian citizen must show maximal responsibility for his vote. The Constitutional right of a political force was violated in the middle of Tirana, in front of the President, We are facing an international gang that is violating our people”, Meta said.