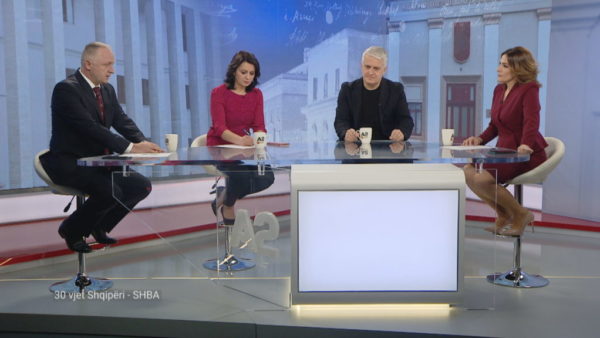 For the former Prime Minister and Diaspora Minister, this moment was key for Albania, as it marked our country’s path towards democracy,

“The reestablishing of the relations turned Albania it its natural conditions. These 30 years are very small for the long history of Albania. Albanians know very well about the friendship with the USA, which is constant and it goes beyond the interest in politics”, Majko said.

Communication expert Edlira Gjoni said that the USA is a reference point for Albania. According to her, the US embassy has come up with very strong decisions regarding Albania.

“We have seen ambassadors rolling their sleeves and counting ballots. Every Albanian has known the names of the US Ambassadors since 1991. The USA is seen as the shining star, since the time of James Baker. The applications for travelling to the USA prove the love Albanians have for this country. Albania’s dependence on the US politics is very high”, Gjoni declared.

Analyst Lutfi Dervishi said that the USA remains one of the best allies of our country.

“The USA has given great support to Albania. Baker’s speech in 1991 in the Albanian Parliament about free and fair elections is still relevant. There was support for Kosovo and for getting Albania into the NATO. There has been support in the last months as well for accelerating Albania’s EU accession”, Dervishi declared.

Former UK Ambassador: Albania has marked regress in some sectors

The former Albanian Ambassador to the UK, and former member of the Council of Ambassadors, Mal Berisha, explained on “Absolut 4” the diplomatic relations between Albania and the USA.

For Berisha, the Albanian Foreign Service still has high-level diplomats who used to be members of the Foreign Ministry Collegium when they were drafting reports against James Baker, the US State Secretary. Besides that, 26 persons who are representing Albania abroad are doing so in violation of several laws, with expired terms and exceeded age limit.

Berisha declared that as regards the foreign image, reports from the US State Department show that Albania has made regress in some sectors, such as the media freedom. “Do we have an enterprising freedom when everyone speaks about an informal economy”, he says.