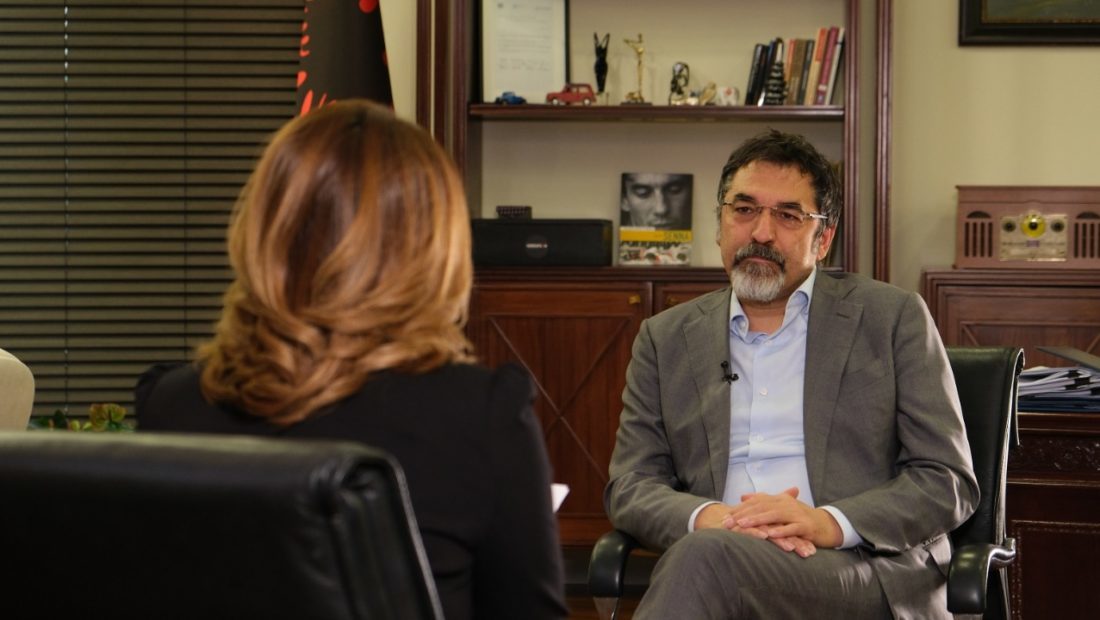 “I made public the purpose of my visit. This is not just an effort. This is ongoing. Just like my predecessor I have not stopped working to repatriate every Albanian who remained in the camps of Syria. My visit there was one of the first steps that we are taking in this direction. Very soon there will be positive news about the Albanians who are left in those camps”, Minister Çuçi declared.

The Albanian Interior Minister was asked about the situation with a crime in Albania. He said that a new effort to fight crime will be unifying the police statistics with those of the Prosecution and Courts.

“We have good relations with the law-enforcing institutions. We have the legal framework and the statistics of the police will be unified to those of the Prosecution, and they will be closer to the statistics of the Court. In the past, Police would take a criminal to the Prosecution, but many cases would be dismissed and criminals would be released, creating this way a vicious circle”, the Interior Minister declared.

According to Çuçi, cooperation between the police and the judiciary structures has resulted positively.

“Police has all the necessary capacities and human resources to fight the organized crime. There have been impressive results and there are constant efforts being done by a state that is getting stronger each day. The fact that we have a new level of cooperation with the justice structures is positive news. With the creation of the Special Prosecution Against Corruption we have realized successful operations. This is another basic element for success. Although the National Bureau of Investigation hasn’t been created yet, police has made excellent responses”, the Interior Minister declared.

Cooperation with international agencies against the drug traffic

The Albanian Interior Minister, Blendi Çuçi, declared that today’s international police operation held between Albania, Italy and Germany, which led to the arrest of several persons, has been led by Albania.

“Those who were arrested today in an operation led by us belong to a plantation that was caught last year. We have frequent joint operations with Italy and a cooperation of equal trust. We have been cooperating with England as well. Albania now has a seat at the Europol, as a member country. This hasn’t been the case with Serbia or North Macedonia. This means that our police has earned their trust”, Çuçi declared.

The Interior Minister declared that in 2016, 40% of the cannabis that was being sold into Italy was coming from Albania. In 2020% it is just 5%, a statistic that proves the success of the Albanian police.”

The US State Department report and cooperation with the OFL

Responding to the US State Department report, the Interior Minister declared that this institution is always very criticizing, but what’s important in this case is that Albania has the necessary will and mechanisms to fight the phenomenon.

Minister Çuçi said that the OFL Operaion for seizing properties built by corruption is still ongoing at the Special Prosecution. Artan Shkembi, who is being accused of deconstructing a mission requested by the German law enforcement agencies, is just an isolated case who is still detained by the police. “Our task is to remove them from the police and bring them to justice as soon as we discover them. Artan Shkembi is an isolated case and doesn’t represent the entire network.

Every citizen will be able to vote, even with an expired ID

In an interview for “Absolut 4”, the Albanian Interior Minister declared that the government will not stop people from voting just because their ID document has expired recently.

“The citizens’ responsibility is to apply. We have increased the capacity and we are working on Saturdays as well. However, there is a high number of citizens who haven’t renewed their IDs. We are going to decide soon about extending the validation period for those documents. I guarantee that all of the citizens will have an ID document on their hands to be able to vote.”